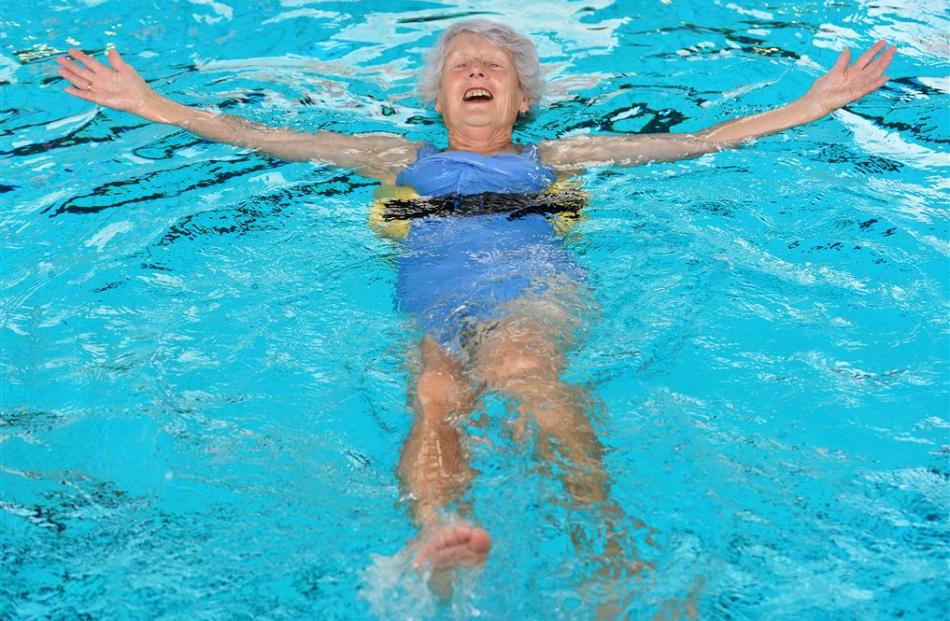 Dorothy Marychurch turned up for the reopening of Dunedin’s physio pool yesterday. Photo by Gerard O'Brien.

Plans to close the pool for two to three months for the renovation, starting after the Christmas holidays were cancelled shortly before the break began when it became clear the renovation could not start right away.

The pool's renovation is pending approval of a long-term lease with the Southern District Health Board (SDHB), which board deputy commissioner Richard Thomson said was up to Health Minister Dr Jonathan Coleman.

Mr Thomson said late last year he could not imagine why Dr Coleman would refuse the request, "but it's not my decision to make''.

The Health Minister could not provide an update on the decision when contacted yesterday.

Hours after the pool reopened, supervisor Gaye Davies said she was glad to see so many people using it.

She had been worried patrons might have been confused by the shifting plans for the pool's renovation.

"I was a bit concerned that not many people knew ... [but] the word seems to be getting around quite well that we're open again for now.''

The changing plans had also forced Ms Davies to scramble to find lifeguards who could work for the pool opening earlier than scheduled.

Some users had questions about the change in plans for the renovation, she said.

"[There's been] a little bit of confusion around what's been going on and what's happening, and people are wondering and asking me questions about what's happening with the upgrade that's supposed to happen.''

But Ms Davies had no answers to give them - that was out of her domain, she said.

Pool-goer Alan Wise was one who had been following the pool's plight.

He understood the problems the redevelopment process faced, but he hoped it would get done.

"I hope that we can keep it going. It provides a valuable service,'' he said.

Dorothy Marychurch, who has been coming to the physio pool since hip surgery seven years ago, was also there for its reopening yesterday.

The pool, she said, was "marvellous''.

And she was relieved when she found out the pool would not be shut for two to three months - at least, not yet.