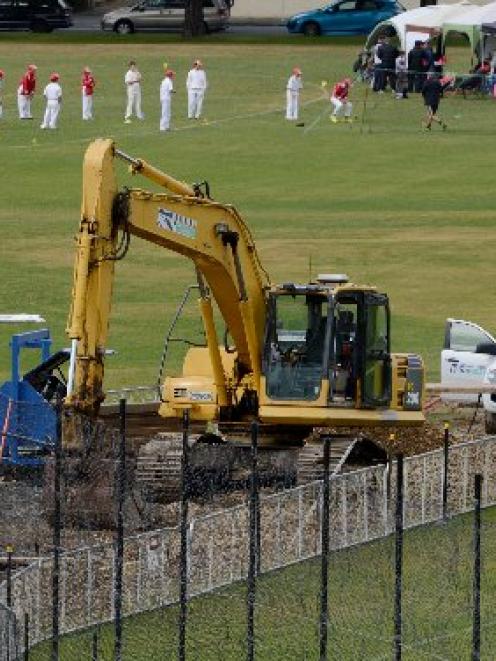 Contractors continue work on a wastewater pipe upgrade at Logan Park, as some of the South Island's top young cricketers prepare for the latest round of the South Island primary schools tournament yesterday. Photo: Gerard O'Brien
A three-month pipe renewal under Dunedin's most prominent sports ground will help ease the pressure on the city's wastewater network.

It was the kind of problem that led to overflowing wastewater pipes popping their manhole covers during last year's South Dunedin flood, sending contaminated water into streets and properties.

Work to install the replacement pipe was expected to be finished by the end of February, at a cost of $300,000, Ms Bennett said.

The old pipe ran from Harbour Tce across part of Logan Park, next to the artificial hockey turfs, and then under the Logan Park tennis courts.

The new pipe would skirt the Logan Park playing fields and the tennis courts.

The work was continuing as some of the South Island's best young cricket players used Logan Park - and other sports grounds - for this week's South Island primary schools cricket tournament.

Ms Bennett said contractors had been instructed to avoid disrupting play and the surface would be put ‘‘back to normal'' once work was finished.