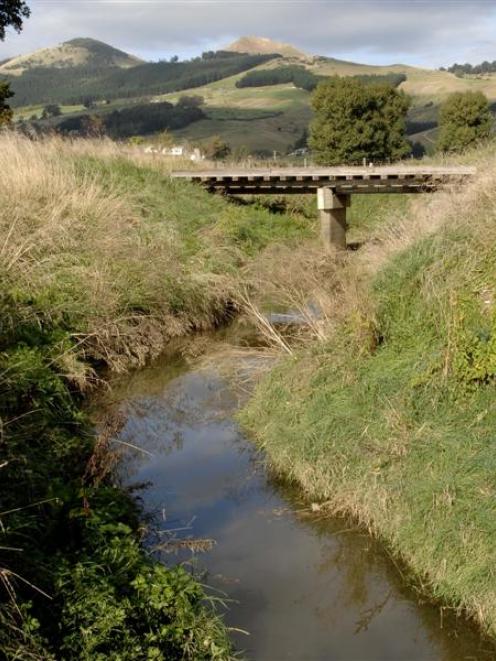 Owhiro Stream, over which the developer would build a bridge or culvert. Photo by ODT.
An 81-lot residential subdivision in Mosgiel should be allowed to go ahead, Dunedin City Council planning staff are recommending to councillors.

Situated at 67 and 67A Gladstone Road North, the 7.5ha block earmarked to be subdivided has been landlocked, preventing it from being developed for the past 35 years.

What has changed is that Wanaka-based Minaret Resources has managed to secure a right-of-way by buying a Hagart Alexander Dr house (No 112), which will be removed.

The land is surrounded by the railway line, a creek, Brooklands retirement village and the Owhiro Creek Reserve.

Access will be gained over that esplanade reserve but council planners say this has been agreed to by parks and recreation services, as it will open access to the southeast bank of the Owhiro Creek and the developer intends to enhance the area with landscaping.

The developer will also be required to build a bridge or culvert over the Owhiro Stream.

In their report, which will be heard before the council hearing's committee on Friday, staff said the actual or potential adverse effects on the environment were ''no more than minor'' and not dissimilar to numerous other subdivisions under way in Mosgiel.

The proposal was also consistent with the district plan and the Otago regional policy statement.

Two neighbours spoke against the development at a hearing earlier this month, but council staff said the effects on them would mostly be confined to the construction and operation of the new road adjacent to their properties and were not a reason to refuse consent.

The developer, former Dunedin accountant Murray Frost, proposes developing the subdivision into 700sq m sections over 10 years and the road construction will occur during the first stage.

The Otago Racing Club is to appeal the council's refusal to grant subdivision and land-use consent for an 11-lot subdivision on land between the Wingatui Racecourse and Gladstone Rd North.

Lawyers acting for the club said the council had erred in that the application met the necessary planning criteria to be granted.

Lawyer Phil Page said that while the land might have rural zoning, it was not a true rural zone given its use and history.

On one side of the proposed subdivision there was the racecourse and on the other land zoned residential 1.

He also said the committee was incorrect when it determined the area's environment and for not taking into account the future environment.

The present environment existed because the racing club had not undertaken some permitted activities on its land and the committee had assumed those activities would not happen in the future.

''The incorrect determination of the environment affects the entire decision,'' he said.

The applicant is seeking the granting of land-use and subdivision consents.

Wingatui resident and opponent of the club's plans, David Wade, said the appeal was a surprise but he wanted to study the grounds of the appeal and speak to others in the community before commenting further.

The DCC has issued 227 residential building permits for Mosgiel since January 2012, generating an estimated total of $70 million in building activity.