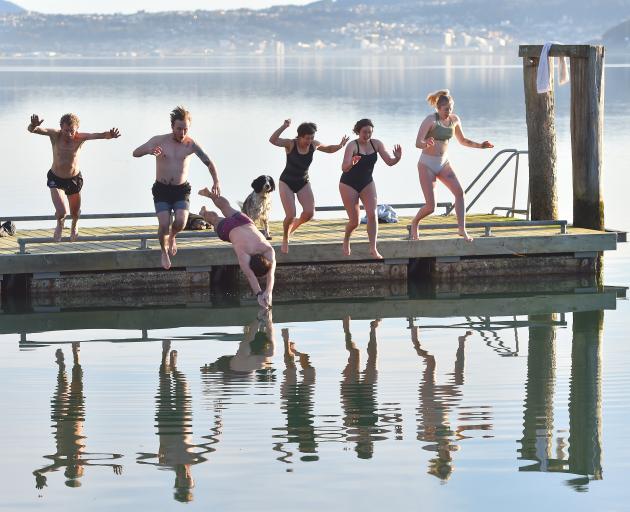 Physio department staff and students (from left) Geoff Anderson, Jesse Gray, Dave Williams (diving), Zhenka (dog), Miranda Buhler, Kate Roberts and Shaeleigh Read leap off the Macandrew Bay Yacht Club jetty in protest at the lack of progress regarding Dunedin’s Physio Pool. PHOTO: GREGOR RICHARDSON
Those seeking physical rehabilitation in Dunedin have been left without an accessible warm water pool for over a year, which has left one group plunging into the city’s cold harbour in protest.

Dunedin’s Physio Pool has been closed since May 2021 after its heating unit broke down.

The pool is unique as it has accessibility features such as wheelchair access, hoists, a slowly increasing depth and water heated to 35degC.

Repairs to the pool have been delayed, leaving the pool still inoperable and some members of the community with nowhere to rehabilitate.

Physiotherapist Geoff Anderson said the pool was an amazing asset to Dunedin and vital to helping those with injuries recover.

He and a group of physiotherapy students and friends leapt from the Macandrew Bay Yacht Club jetty on Saturday to help bring some awareness to the issue.

The harbour was "amazingly cold" and gave each of the swimmers a bit of a shock.

It was the perfect contrast to the incredible benefits the pool provided, Mr Anderson said.

The 35degC water was warmer than a typical pool, which helped stimulate the nerves.

That stimulation overrode pain and was "extremely effective".

When a person stepped into a pool a lot of weight was taken off their legs, Mr Anderson said.

By the time the water reached your chest, your legs held 80% less weight than on land.

The hospital used to refer people to the pool regularly, as it was an incredibly effective form of treatment, he said.

Now there was simply no option for many people who had accessibility requirements.

The pool, based in Hanover St, was in a fantastic location near the new hospital and it would be a shame to see it further neglected, he said.