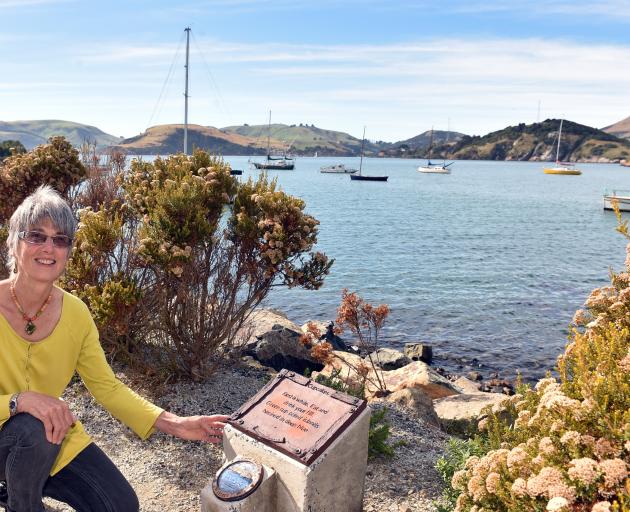 Glorious views of Otago Harbour have form a magnificent backdrop for the new Back Beach Poetry Trail in Port Chalmers.

Created by the Back Beach Writers’ Collective, a group of West Harbour writers and poets, the poetry trail was opened last Sunday morning.

Port Chalmers writer and ceramic artist Tina Grubba, a member of the collective, has handcrafted 11 ceramic tiles, each bearing the words of a poem celebrating the writer’s connection to Back Beach.

These have been placed on a series of plinths, designed and installed by collective member Robert Free, along the Back Beach foreshore.

Grubba said the poetry trail was a gift to the community from the Back Beach Writers group, in celebration of its 10th anniversary.

The $4500 project was supported by Creative New Zealand via the Dunedin City Council, Bendigo Valley Sports Foundation, Otago Polytechnic, Architecture Van Brandenburg and John Homes of Frayed Frisket Press. Port Otago and the DCC had given permission to use the sites, and Ngai Tahu had supported the concept, Grubba said.

The concept of the poetry trail arose through discussions between Grubba and Brickell about Port Chalmers clays, which triggered powerful memories for Brickell of his time working with Ralph Hotere in the 1970s.

Brickell offered a literary contribution and a residency at Driving Creek Railway and Potteries, Coromandel, for Grubba and suggested the Driving Creek clay would be suitable for the poetry trail project.

Sadly, Brickell died before Grubba could take upthe residency, but she was able to visit Driving Creek in January last year and bring back the clay to make the tiles.

The Back Beach poetry trail will be officially opened by Dunedin Mayor Dave Cull on at 2.30pm on Sunday, at the Port Chalmers Yacht Club.