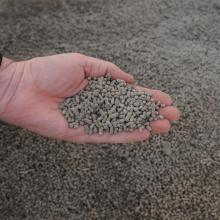 Diatomite processed into fertiliser pellets.
A multimillion-dollar project to restart a diatomite mine at the Foulden Hills, near Middlemarch, is being proposed by its new Australian owner Plaman Global.

There is potential for more than 100 staff in  Otago and Southland, plus a fleet of trucks delivering diatomite, with an eventual annual production target of hundreds of thousands of  tonnes.

It is  understood Plaman Global is  working with Goldman Sachs to raise capital for the venture, while setting up its New Zealand management structure.

The plan is to have a staggered process over two to three years to get  quarrying under way near Middlemarch, potentially with processing  in Southland.

Unlike former mine owners Australian company Featherstone Resources, which was unsuccessful in developing its diatomite to fertiliser project, Plaman plans to  process the mineral into a 100% organic, high-value stock food additive.

Plaman has appointed Craig Pilcher as general manager in New Zealand. He was unable to comment on the proposal, as  negotiations are still under way on several fronts.

Industry sources have said 98% of the Foulden Hills quarry contained the globally rare "black diatomite", which is rich in organic matter. Common white diatomite is not.

The Middlemarch quarry has the potential to be  one of only a few in the world on such a large scale. The  mineral’s properties made it ideal as a natural and organic animal feed additive, Plaman’s website said.

As a feed additive, to be branded Black Pearl, it reduced antibiotic usage, stimulated growth and improved both feed quality and animals’ gastrointestinal health.

Efficacy trials by animal nutrition researchers AHPharma Inc in the United States, reported last year on chickens and in June this year on pigs, had been successful,Plaman’s website said.

Diatomite as fertiliser was worth $500-$600 per tonne, while diatomite as a stock supplement is understood to fetch a significantly higher price per tonne. Foulden Hills, off Moonlight Rd, was estimated to contain 31 million tonnes of diatomite and had an estimated 27-year life, Plaman’s website said.

It was understood processing would start at about 100,000 tonnes a year and within four years could be targeting  a five-fold increase.

The initial start-up funding, understood but not confirmed, will be at least in the tens of millions of dollars.

While the mine is at present 42ha, there is an application before the Overseas Investment Office from Plaman to acquire a further 400ha of adjacent land.

The quarry could employ 20-40 staff and the processing plant more than 90.

Sources have said it is proposed to truck the diatomite 260km to Awarua, between Invercargill and Bluff, to a 30ha processing site.

The raw diatomite would be dried to remove its 60% moisture content, crushed into particles and then granulated to add to stock feed as a supplement.

Export was  likely to be from South Port at Bluff, because Port Otago did not have the specific  bulk cargo-handling facilities required.

The Middlemarch mine was started and briefly operated by privately-owned Featherstone Resources in 2011, with a small processing plant near Mosgiel.

However, production was minimal and the company was ultimately placed in administration then receivership by 2014, after protracted litigation in the Australian courts, because it was registered as a foreign company here.

Plaman Global, known for purchasing distressed assets, bought the operation for $A4.8 million ($NZ5.25 million) through a deed of company arrangement in March 2015. It acquired the Middlemarch property from Holcim in November 2015 for $NZ650,000, with Overseas Investment Office consent.

A chalk-like, fine-grained, silicon-bearing, sedimentary rock made from fossilised microscopic remains of water-borne single-cell algae called diatoms, impregnated with silica. Once mined and crushed, it resembles hard fertiliser such as limestone or phosphate.

"The Middlemarch quarry has the potential to be one of only a few in the world on such a large scale".

So why give it to the Ozzies, and why do the processing in Southland ??
First rule of Rugby ... don't give away possession of the ball !!

But I must admit the "What it is" and "Uses" makes extremely interesting reading; gives a whole new meaning to "$hi++ing Bricks" ... especially the alcohol impregnated exploding type ... ;-)