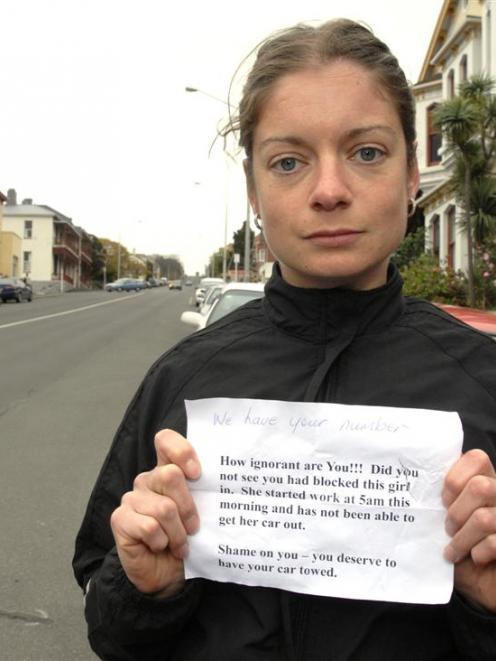 Megan Balchin displays the message she received from an angry motorist after returning to her car in High St. Photo by Gregor Richardson.
A motorist involved in an angry confrontation with another motorist says the Dunedin City Council's new parking regime is partly to blame.

Dunedin woman Megan Balchin (28) said she became involved in an altercation with another motorist who blamed her for being "parked in" on Wednesday night in High St.

Miss Balchin said she had just returned to her car when the other woman appeared from a car parked behind her, banged on Miss Balchin's vehicle and began shouting.

Getting out to discuss the alleged "infringement", Miss Balchin said she then noticed an anonymous typed note tucked under her windscreen wiper, criticising her "ignorant" parking and warning: "We have your number".

Miss Balchin said the altercation was eventually sorted out, after she argued the car behind the upset woman's vehicle - and not her own - was to blame for parking her in.

It turned out the woman had been forced to wait in her car for two hours before being able to leave, Miss Balchin said.

"She said it happens to her all the time and next time she will just basically push her way out of the park."

However, Miss Balchin said the incident highlighted the increasing pressure on free all-day parking close to the city since the introduction of the council's new parking regime.

More workers in need of all-day parks were searching High St for spare free parks, and squeezing into tighter spots, she said.

"People are under pressure to park in places perhaps they normally wouldn't.

"There used to be gaps of a few metres between cars, but now things are a lot tighter."

The altercation comes just days after delivery driver Grant Fridd (44) brought George St to a halt in a one-man protest after a dispute with parking officers on September 16.

He acknowledged the parking regime had resulted in commuters parking further away from the central city, and that some areas with pay-and-display machines were "not getting a lot of use".

The issues would be considered as part of the council's planned three-month review of parking, he said.

"Obviously, it concerns us if people are getting [aggressive], but I haven't personally heard of any other cases," he said.

A staff member from High St-based company Hanlon and Partners Ltd - who would not give her name - said when contacted she had placed the anonymous note on Miss Balchin's windscreen, as well as the vehicle parked behind her car.

"And why not? It was disgustingly ignorant parking," the woman said, adding she would do it again.