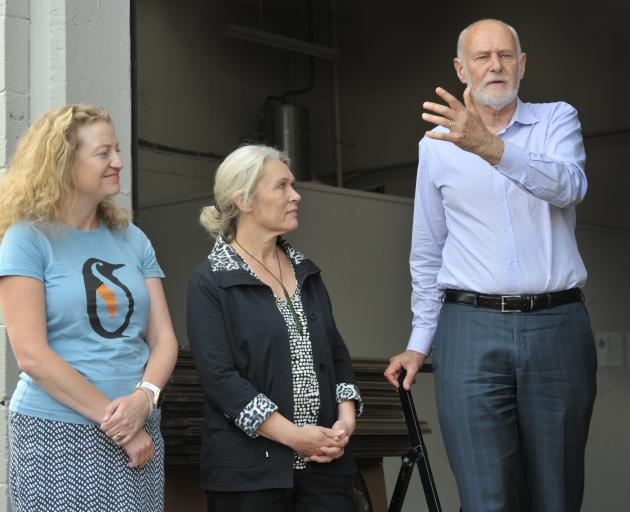 Labour MPs Rachel Brooking (left) and Ingrid Leary listen to New Dunedin Hospital project chairman Pete Hodgson talk about generating a workforce to build the hospital. PHOTO: GREGOR RICHARDSON
Generating a workforce to build a hospital worth at least $1.4 billion will take a concerted effort — and prison inmates are among the likely future employees who have begun training for the assignment.

New Dunedin Hospital steering group chairman Pete Hodgson told a gathering yesterday the recruitment team wanted more women to sign up for the construction industry, as well as people who would need to find work after leaving "the Milton Hilton".

He spoke at the formal opening of Workforce Central Dunedin, set up initially to support the hospital build.

The programme is funded by the Ministry of Business, Innovation and Employment (MBIE) and is worth $1.85million over four years.

Other parties making in-kind contributions would include the Department of Corrections and the Ministry of Social Development, he said.

The project would include marketing to high school pupils and people looking to return to Dunedin.

The importance of engaging with Ngai Tahu, university and polytechnic students and training for the existing workforce had also been recognised.

Mr Hodgson was mindful of one of the big risks attached to building the hospital — the difficulty in finding enough workers with the right range and level of skills at the right time.

"We need to find and introduce to the construction sector many hundreds of people," he said.

"We want as many local people as possible building this hospital.

"The more we can generate our own skills, the better positioned our own businesses will be to win the various contracts that become available."

More than 300 new locals will need to be recruited to help build the hospital, it is estimated.

They will be supported by 300 people already working in construction in the city.

Another 300 will have to come from outside Otago.

Mr Hodgson said the assignment was challenging, but preparation time was being used well.

"We’ve got time and we are using it."

The hospital build presented a chance to improve job prospects of unemployed and under-employed people in Otago, Mr Hodgson said.

They would be well placed to get further work in construction after the hospital project.

Workforce Central Dunedin general manager Mark Cartwright said people would need to be drawn in to the construction sector and it would need to make sure others were not needlessly lost. Pastoral care was part of the programme, he said.