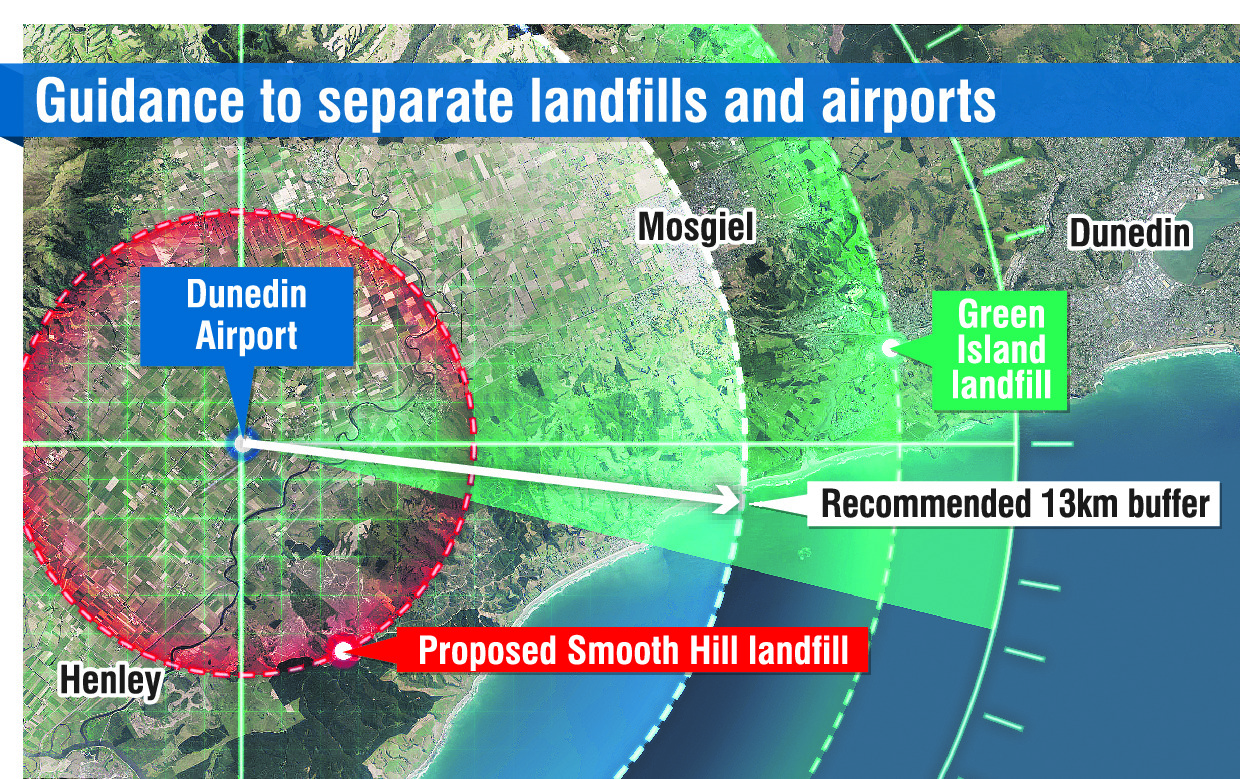 A proposal to start a landfill near Dunedin Airport could hit turbulence unless there is a vigilant system to prevent bird strike.

The proposed Smooth Hill landfill would be just 4.5km from the airport, well inside the Civil Aviation Authority’s recommended 13km buffer.

The potential for the landfill to attract birds, particularly gulls, has been identified as a risk.

It would require strict management, including killing birds.

Submissions have opened on the Dunedin City Council’s application to establish a landfill at Smooth Hill and the airport has said it will make arguments.

‘‘Dunedin Airport’s main concern will always be anything related to aviation safety,’’ a spokeswoman said.

Any increase in wildlife activity in the vicinity of the airport would be of concern,

and the airport had been working with the council to mitigate potential problems, the spokeswoman said.

An ecological assessment prepared for the council referred to a separation guideline of 6.5km between airports and landfills.

However, international civil aviation guidance is for landfill sites to be no closer than 13km from airport property.

The airport made that point when it commented last year on proposed regional waste rules affecting landfills.

The species of most concern at the landfill would be the black-backed gull, the ecological assessment stated.

‘‘This is because they are large, common birds that fly to and from the coast and Taieri Plain, including over and in the vicinity of the landfill site.’’

A high standard of operation, control, discipline and vigilance would be needed throughout the lifespan of the landfill, a draft bird management plan said.

Analysis in 2017 showed Dunedin already had a medium incident rate of bird strike and the trend had been upwards.

However, the proposed landfill site being on the coast side of the airport reduced risk, consultancy Beca said in a site selection study in 1992.

The airport is owned by the city council and the Crown, 50% each.

That was not expected to influence proceedings; arm’s length separation between the council and Dunedin International Airport Ltd was achieved through the company structure, a council spokesman said.

Seriously this is gold - why was this not considered initially and stopped dead in its tracks? What skills, qualifications do these consultants / planners have / do they have any? Are they that arrogant that they don't care? Somebody should be fired from the DCC, it happens all too much - very similar to putting a welding shop on the forecourt of a petrol station. It would never happen.