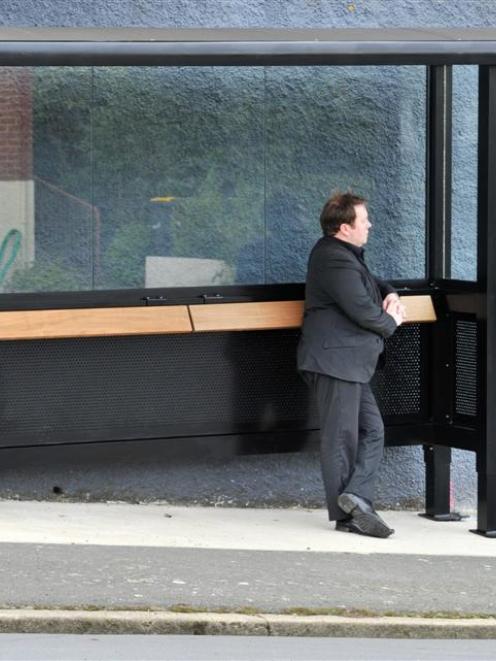 The Ross St bus shelter. Photo by ODT.
A proposal for a new batch of bus shelters has left some affected property owners in less than a transport of delight.

About every two years the Otago Regional Council (ORC), which runs the city's public bus service, proposes a new batch of bus shelters and the Dunedin City Council (DCC), which manages local roads and footpaths, approves them.

The ORC funds the installation and ongoing maintenance of the shelters and the DCC owns them.

The latest proposal is for 26 new bus shelters, and while there appear to be no issues, most already having gained consent from affected nearby property owners, the proposed placement of 10 has upset some.

Those who own or live in properties near the proposed shelters were consulted about their placement.

Common reasons for opposing the bus shelters included that they would block views of shop windows or businesses, ruin the appearance of heritage homes, devalue properties or take up footpath space.

Many asked why a shelter was even needed when they were hardly ever used, with Ken and Judith Gager even providing a small, unscientific survey showing that in nine days one person used a Playfair St bus stop in line for a shelter.

The owner of the Princes St Convenience Store, Amrik Singh, said a shelter outside his store could ''act as a concealment for people planning assaults/robberies on the convenience store'' as well as obstructing the view into the premises, which also compromised security.

Building owners Lois Stevens and Andrew McKibbin also opposed that bus shelter, saying it would attract ''delinquents'' and encourage vandalism in the area.

Craig Hamilton ''strongly opposed'' a new bus shelter in Ryehill St as he was concerned it would devalue his home, while Lysette Riley ''completely objected'' to it, saying it would affect visibility when she accessed her garage.

John Marsh, from Cooke Howlison, said a bus shelter outside his business was ''totally unnecessary'' and a waste of money because there were two shelters nearby and the bus stop in question was virtually unused.

A shelter would screen vehicles on display in his car yard on what was on an expensive strip of road frontage, he said.

ORC support services manager Gerard Collings said the ORC had a policy to provide, over time, shelters at all bus stops where larger numbers of people boarded.

Besides sheltering bus users, the structures also provided a better way of publicising services than small signs fixed to poles.

Shelters could also increase usage of the service, as one factor discouraging people from using buses was that it could be unpleasant to stand at an unsheltered bus stop in inclement weather.

ORC staff had been careful to try to avoid routes at present under review in the council's draft regional public transport plan, although that was not to say that at some stage in the future some shelters might have to be shifted, Mr Collings said.

Shelters were bolted to sites, so were relocatable.

A DCC hearings committee of Crs Andrew Noone, David Benson-Pope and Neville Peat will consider the submissions at a hearing on Tuesday.