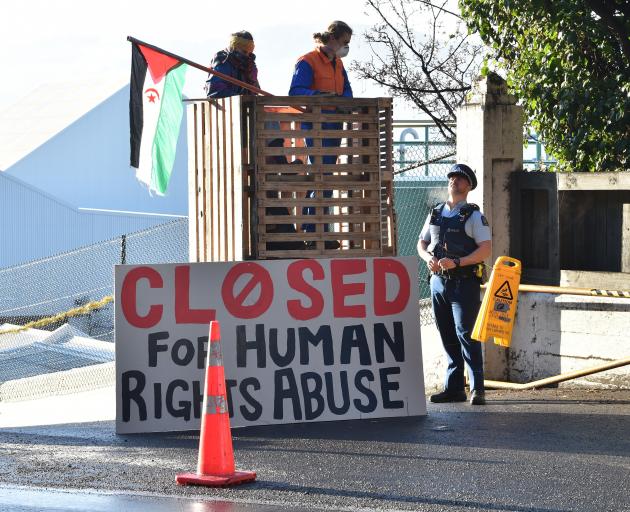 About 15 people gathered at the two entrances to the plant to protest the arrival of Trans Spring, a ship carrying fertiliser from the disputed territory of Western Sahara, which Morocco is accused of illegally occupying.

Police were present at the protest.

In purchasing and importing the phosphate, Ravensdown was financially supporting the continuation of a military occupation and oppression of the Saharawi people.

"A hundred and eighteen countries recognise this as a gross human rights abuse, but we still don't."

Structures made out of pallets made it harder for the group to be moved on, she said.

Ravensdown Group communications manager Gareth Richards confirmed it was receiving a shipment of phosphate rock from Western Sahara, "which the UN designates as sovereignty undecided".

The shipment was estimated to arrive this weekend.

"As an essential service, Ravensdown is working hard to help farmers grow the food for export that earns the dollars that subsidise New Zealand’s social and economic recovery.

Yes, the world is full of injustice but the worst injustice of all is when people starve to death, when there was no need for that to happen.
Ironically, these protesters, protesting on the first working day of the week, show clearly that they are NOT contributing to the welfare of this country because they are not at work.
That can only mean that they are being sustained by the removal of wealth from working people and they then use that privileged to stop others from going about their lawful business, while claiming some sort of moral prerogative.
That has nothing to do with self esteem, assertiveness nor justice.
That is wilful ignorance, arrogance, entitlement and an elitist attitude that shows a total lack of moral character.
It is total possible to protest a position, leave others to go about their lawful business and have a job.

They had a day off?

The Protestant Work Ethic is not an argument these days. The 'elite' comprise protestors with a cause? Times have changed.

Some people do not work Monday to Friday. It would best if these protesters consider the neccasry "Evils" that modern society require to function. And the fact that normal supply of goods and raw materials have been disrupted recetly.

So Mr Richards let's make this absolutely clear. Are you saying that Black Lives don't matter as much as the wealth and prosperity of the rural community and economy of NZ? Are you suggesting that even though as a nation we are probably one of the most fortunate countries in the world with regards to the effects of the pandemic, that we should continue to trample over the rights of an African Minority so we can recover quicker? Good job there isn't a public statue of you!