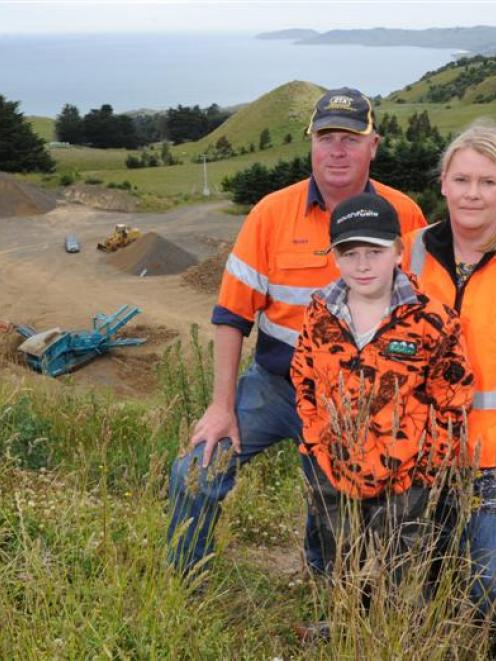 Geoff and Tracey Scurr, with son Jack (11), hope to rebuild their Kilmog Quarry business after a ''devastating'' fight to obtain a new consent from the Dunedin City Council. Photo by Craig Baxter.
The Dunedin City Council's resource consent process has been criticised by the owner of the Kilmog Quarry, north of Dunedin, who says it ''cleaned out'' her business and put jobs on the line.

However, council staff have defended the process, saying ''substantial'' costs were unavoidable because of the complexity of the hearing.

Tracey Scurr's criticism came at the end of a year-long battle for a new consent for the quarry, which ended last month with a deal brokered after an appeal to the Environment Court.

Mrs Scurr estimated the consent process had cost the business close to $100,000 in direct costs, including lawyers and consultants, over a year. She also blamed the process, and comments by council staff, for a drop-off in business at the quarry last year, as customers mistakenly thought it had closed.

Delays completing the hearing had also contributed to the final bill, which was likely to approach $200,000, she believed.

The entire process had been ''devastating''.

''There was a point last year where I thought we were going to have to let staff go,'' she said.

The Scurrs had applied for consent to extract between 15,000cu m and 45,000cu m of rock each year from the quarry, but council staff wanted a 15,000cu m limit, to protect neighbours from noise, dust and other problems.

The arguments rumbled on until the council hearings committee in August granted consent with 24 conditions, including a 30,000cu m limit.

The Scurrs appealed to the Environment Court, leading to mediation talks and last month's ruling the restriction could be eased, with up to 50% of unused rock extraction able to be carried over from one year to the next.

Mrs Scurr said the last year had been ''a really worrying time'' for her family and the business.

That was in part due to claims by council staff the quarry had been operating outside an earlier consent, issued to a previous owner in 1998, and meant the Scurrs were, in theory, at risk of prosecution. Staff claimed the original consent limited extraction to 5000cu m a year, but the Scurrs had been taking up to 17,000cu m a year.

The consent document itself did not ''expressly stipulate'' any limit, but other documents did, staff claimed.

However, Mrs Scurr said she had tried in previous years to obtain more information from council staff about the original consent, and was told none existed, only for it to come to light in mid-2011.

''Then they said we had all these restrictions put on us by this original application, which we never knew about.''

The council appeared to have been trying to ''blame us for the situation'', but any mention of prosecution was ''terrifying'', she said.

''We like to do things right and it was a shock to find that out,'' she said.

There was ''no reason'' for council staff to mention a possible prosecution, ''other than to bully us into a process'', she believed.

The illness of hearings committee chairman Cr Colin Weatherall part-way through the hearing - while unavoidable - had also contributed to delays, and the council appeared to have no back-up plan to continue the hearing without him, Mrs Scurr said.

Council senior planner Campbell Thomson rejected claims of bullying, but said it was ''appropriate'' to mention the risk of prosecution the Scurrs could face without a new consent.

The time - and cost - involved in the hearing reflected its complexity. There was a ''fundamental conflict'' of views between the quarry's owners and neighbours, both backed by expert evidence, he said.

However, delays had allowed more work behind the scenes, including a quarry management plan that helped bring the two sides closer together by the time the hearing resumed, he believed.

The process had taken ''longer than expected'', but council staff had not tried to prolong the process and all parties were kept informed, he said.

Cr Weatherall said, when contacted, his health problems meant he took ''some of the responsibility'' for the delays, but the Scurrs could have asked for the hearing to continue without him.

He was not aware of any such request.

Quarry neighbours wanting more input into a quarry management plan part way through the hearing had also add to the delays, he said.

Mrs Scurr said, despite the costs, she was ''probably too proud'' to seek compensation involving public money, but wanted ''things to change''.

''I want them to have more respect for a person's existing business.

''At the beginning I was told by one of the [council] planners not to lose any sleep over it. Honestly, that couldn't have been more wrong.

''I lost an incredible amount of sleep.''