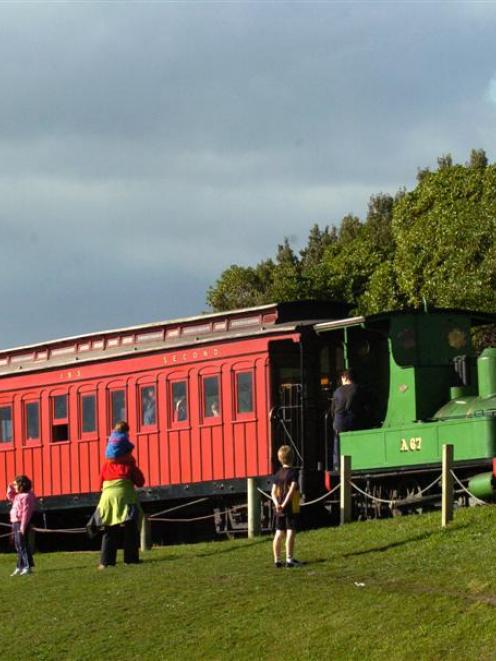 Locomotive Millie on the railway line at Kettle Park. Photo by Gerard O'Brien.
A call for a fund to support Dunedin's industrial heritage has not found favour with Dunedin City Council staff, who recommend it be rejected, saying it is "not a current priority".

The idea came during annual plan meetings earlier this year from Otago Railway and Locomotive Society chairman Campbell Thompson, who asked for a dedicated discretionary fund for non-profit groups involved in industrial heritage.

The society faces long-term problems, as its 700m railway line at Kettle Park may have to go when the council comes up with a management plan for an area affected by encroachment by the sea.

Mr Campbell has said in the past the society was committed to staying at the beach, and expanding to run between St Kilda and St Clair.

He said yesterday there was money for things such as built heritage and significant trees, and it would be helpful to groups such as his to have a fund to provide some certainty when planning for the future.

It was not "the end of the world" for the society if the committee did not support the idea, but he planned to keep lobbying to get council support.

The report, from heritage policy planner Glen Hazelton, is due to be debated by Monday's planning and environment committee.

It recommended the request for an industrial heritage fund be declined.

It did not address the future of the railway, which it said would be clearer when the council released a management plan for the St Clair, Middle and St Kilda beaches, expected by next June.

Mr Hazelton said the $40,000 Dunedin heritage fund was the council's primary funding vehicle, which organisations such as the Dunedin Gasworks Museum Trust had used in the past.

That fund was primarily for building owners who had few other options for assistance to restore buildings.

The area of greatest need for the city remained in assisting private owners to protect built heritage.

Broadening the fund to include "movable heritage" could cause problems.

"Efforts should focus on better promoting and allocating this fund to this area, rather than diversifying the pool of potential applicants."