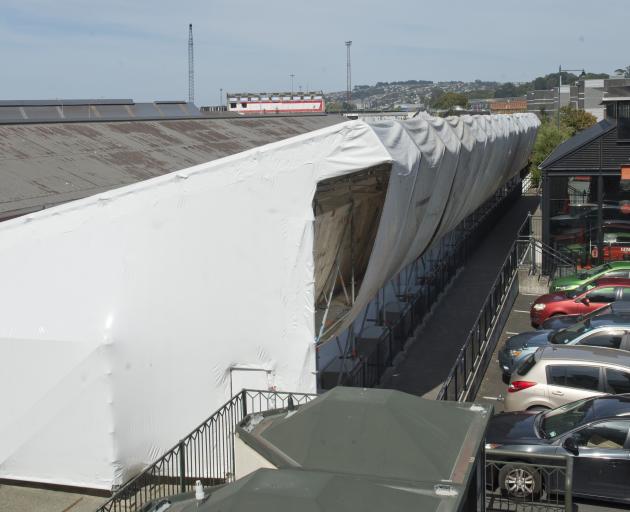 The redevelopment of the Hillside railway workshop was the first domino in a sequence of events that led to Dunedin Railways’ new temporary home.

"We were a short-term tenant, and therefore our tenancy came to an end as they needed the premises themselves."

Now Dunedin Railways will be doing its maintenance work in the scaffold being set up next to the railway station.

A resource consent for the scaffold issued by the Dunedin City Council showed the structure was consented until January 23 next year.

Mr Cooper said that timeframe was not necessarily indicative of the amount of time temporary facilities would be required, as Dunedin Railways was waiting on the council to make its decision about the long-term fate of the organisation.

"This is all tied up with waiting for the outcome of the DCC’s deliberations into their long term plans for Dunedin Railways."

The temporary shed would allow the organisation to remain operational in the meantime.

The loss of the Cumberland St facility had played into Dunedin Railways’ recent consideration of selling some of its ageing rolling stock.

Dunedin Railways elected not to sell any carriages or locomotives after a public backlash to the planned sale.

The scaffold is being set up over a siding to the southwest of the railway station, running between the main platform and the JA 1274 steam train building.

It is being covered with a white shrink-wrap material, and the shed’s fit-out is expected to be completed next week.