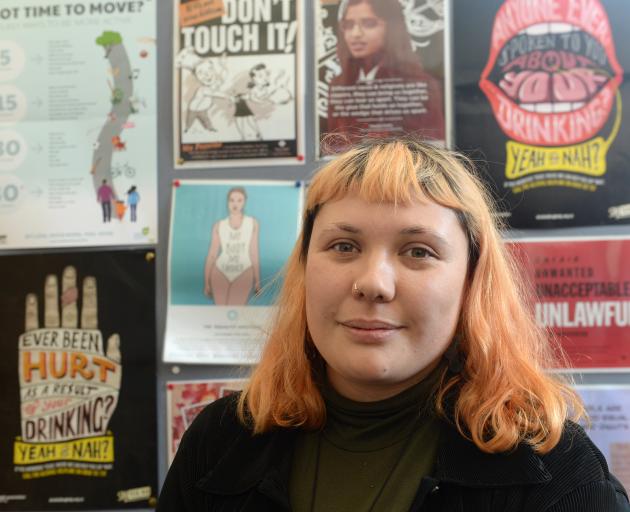 "It's a thing we see daily in general conversations, people blaming the victim.

"If there's alcohol involved, it's 'why did you drink that much?'.

"Or, 'you shouldn't have been out by yourself, you should have worn more appropriate clothing'.

"There's a lot of that victim-blaming, and rape culture can be ... normalised by things like joking about sexual violence."

Rape Crisis Dunedin is best known for its work supporting those whose lives had been affected by the trauma of rape and/or sexual abuse.

But it also delivers education programmes, including the ACC-funded "Mates and Dates" to teach high-school pupils about consent and healthy relationships.

Ms Hayes believed this work was helping to address attitudes which fostered rape culture in Dunedin.

"There is a positive change happening."

The 24-year-old has worked as a paid fundraiser for Rape Crisis Dunedin for two months, having previously volunteered for the organisation for two years, spurred by her experiences in the Dunedin music scene.

Ms Hayes said the fact dozens of people had already signed up for the annual Rape Crisis quiz night at New New New Corporation next Thursday reflected strong community support for its work.

However, as a feminist organisation, Rape Crisis was "always prepared for backlash from certain people," especially while collecting during the annual appeal week, Ms Hayes said.

Some of the backlash stemmed from the fact Rape Crisis was geared towards women and non-binary people, but men who approached the organisation would not be turned away, Ms Hayes said.

Instead, they would be listened to before being referred to other organisations better equipped to help them, she said.

A year with Rape Crisis