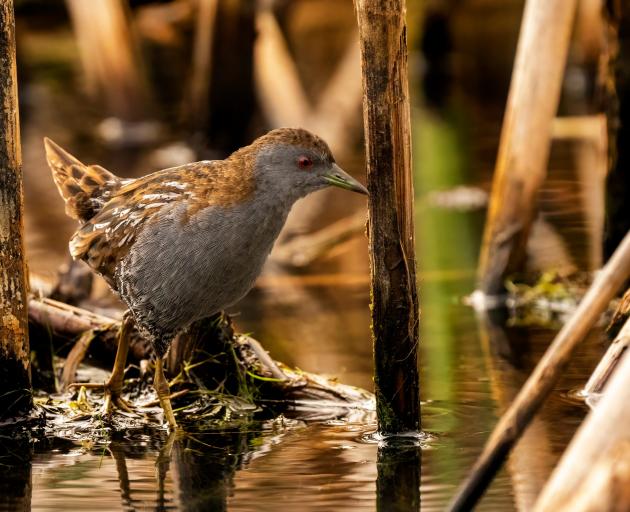 Occasional sightings of white herons (kotuku) are made in the city each year, but such sightings have also recently increased because a bird has been living in the lagoon area for some time.

New Zealand Birds Online, a digital encyclopedia, describes the crake as ‘‘one of the most secretive’’ New Zealand birds, partly because it occupied dense wetland vegetation.

Birds New Zealand Otago representative Mary Thompson said the crake was hard to see, and adept at hiding among raupo reeds. Lower water levels may have made the crake more visible, she said.

The white heron, which had long been observed living in the area by Birds New Zealand members, was being seen because it had arrived from elsewhere, such as Okarito on the West Coast.

Dunedin youth worker and wildlife photographer Fiona Gill said it had been exciting to see a ‘‘lovely little pair of marsh crakes’’ last Sunday, after being alerted by a fellow photographer.

The Otago Regional Council has developed a Draft Tomahawk Lagoon Outline Management Plan, including a high-level account of the issues, objectives and potential projects for the lagoon.

Department of Conservation technical adviser Bruce McKinlay, of Dunedin, said the recent sightings again showed the high biodiversity values of the Tomahawk Lagoon as part of a network of wetland areas used by nomadic birds.

People wishing to see the protected birds should remain quiet as they approached and leave their dog at home, Mr McKinlay said.