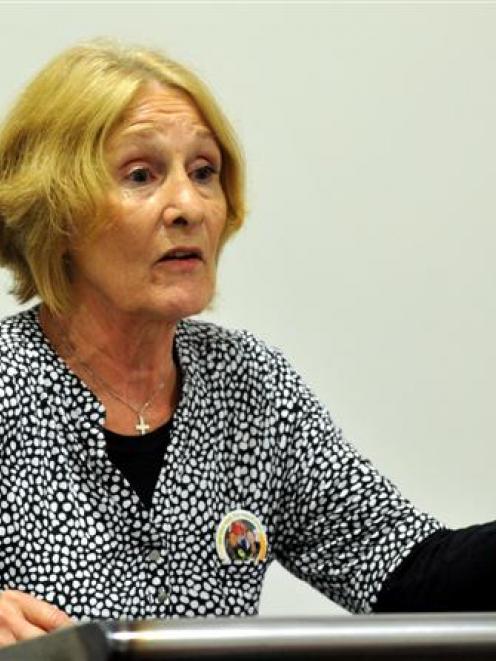 Kristine Bartlett speaking in Dunedin last night about the landmark equal pay case. Photo by Gregor Richardson.
The caregiver behind the equal pay case that has shaken the aged care sector has seen her hourly pay rate go up by less than $5 during 23 years in the same job.

But that might change because of the landmark finding that her low pay could constitute gender discrimination, Kristine Bartlett told an audience in Dunedin last night.

Ms Bartlett, of Lower Hutt, said she felt excited and privileged to be the caregiver to take the test case, backed by the Service and Food Workers' Union. She was confident it would prompt real change; workers could not continue to be ''treated like slaves''.

Just before Christmas, the Supreme Court refused to hear an appeal against the finding. Union lawyers are now considering which male dominated job with similar responsibility levels to choose as a comparison point, which is the next step in the case.

Ms Bartlett said she was a caregiver because she loved looking after people.

It was tough, both physically and emotionally. She formed bonds with residents, comforted the lonely and nursed the dying.

Low pay meant people without experience became caregivers, and that, combined with general under resourcing, made her worry about residents' safety.

Some carers put their bodies at risk by not working in pairs when lifting people. Many came to work sick, because the industry norm was five days' sick leave a year in a job where people were at greater risk of illness.

One of about 40 people in the audience was former labour and state services minister Stan Rodger, who was part of the 1980s' Labour government.

He told the Otago Daily Times after Ms Bartlett's talk that while he supported the case, New Zealand was also ''trapped'' in a low wage economy. Many workers faced a ''hostile'' environment, for which he blamed the 1991 Employment Contracts Act.