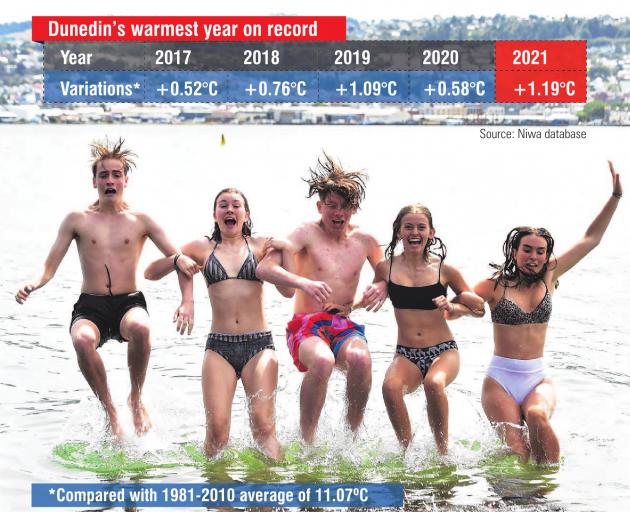 But then again, Dr Jim Salinger, of Queenstown, said alarm bells should have been ringing for decades before last year when the average temperature in Dunedin reached a record 12.3degC.

The record temperatures logged at the Musselburgh weather station in 2021 were 1.2degC above "normal", the 30-year average from 1981 to 2010, for the year, Dr Salinger said.

Over the year the number of frosts had dramatically decreased in the city, and there were more high temperature extremes, he said.

In December, Dunedin averaged 15.2degC, or 1.4degC above normal for the month, Dr Salinger said.

Dunedin was different from other parts of the South because it was surrounded by hills that cut off cold air seeping into the city from inland.

Nevertheless, across the region 2021 was the second-warmest year on record, averaging 11.3degC, or 0.9degC above normal, he said.

Average temperatures for Milford Sound were the third-highest on record (11.3degC).

New Zealand averaged 17.8degC for December, or 2degC above normal for the month.

The country averaged 13.5degC for the year, or 0.9degC above normal, making 2021 the warmest year on average recorded by the "seven station series", which collected data from Auckland, Wellington, Masterton, Nelson, Hokitika, Lincoln and Musselburgh.

Temperature records being approached, or broken, should be "unsurprising".

The adjunct research fellow at the School of Geography, Environmental and Earth Sciences at Victoria University of Wellington said at present the oceanic conditions pushed the country into a La Nina phase, which brought northeasterlies in spring, early-summer easterlies, and highs that tracked further south. 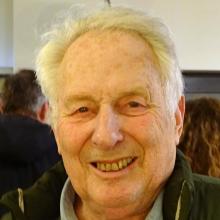 Jim Salinger
"Plus we have global warming," Dr Salinger said.

"There’s a huge inertia in the climate system; you don’t stop fossil fuels and ‘stop’ warming.

"The Southern Ocean is such a huge flywheel.

"It’s a pity that politicians don’t understand the lag in the climate system — and there’s quite a lag — so even if we stop right now, we keep warming for a few decades.

"The alarm bells have to go."

The National Institute of Water and Atmospheric Research (Niwa) said yesterday researchers had analysed 70 years’ worth of data across the country and found extreme weather events, such as record-breaking heatwaves, were increasing at a much faster rate than the mean temperature.

Over the past 10 years there had been on average four to five times more extreme high temperatures than expected in a climate with no long-term warming, the crown research institute said.

Niwa climate database scientist Raghav Srinivasan, the lead researcher of the study, said the findings backed up anecdotal evidence from the past several years.

In the past 10 years, Niwa had reported many record-setting high temperature extremes, Mr Srinivasan said.

The new research now allowed scientists to say much more confidently that climate change was not a thing of the future.

"It is happening to us now," he said.

"The extreme events that we were once warned about are playing out across the globe, with droughts, storms, and forest fires happening a lot more often than even just a couple of decades ago."