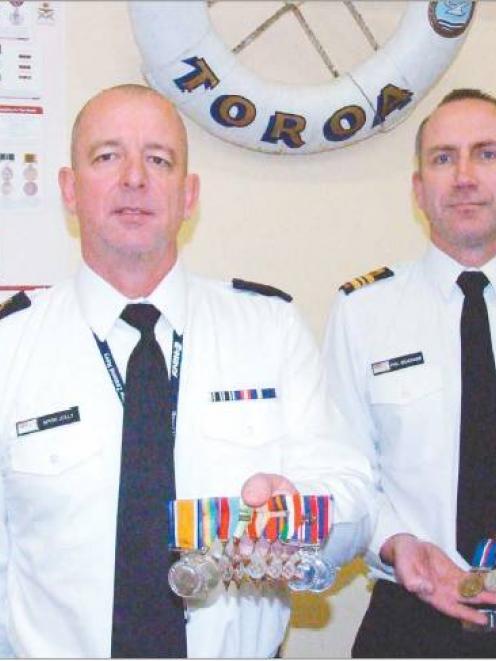 Celebrating service: Navy Otago divisional coxswain Mark Jolly (left) discusses the World War 2 medals of his grandfather, Walter Jolly, with two of the organisers of the Remembrance 2008 commemorations, Navy Otago resident naval officer Lieutenant Commander Phil Bradshaw and Dunedin RSA president Jenepher Glover.
All eyes will be on Dunedin in November as the city pulls out all the stops for a Remembrance 2008 celebration that will be ‘‘bigger than Ben Hur''.


From November 7 to 11, Dunedin will host top brass from the New Zealand armed forces and military and embassy representatives from up to eight other countries for the event. Timed to coincide with the 90th anniversary of Armistice Day (November 11, 1918), which ended World War 1, Remembrance 2008 will bring together the armed services, veterans and their descendants, civic representatives and the public in a huge act of remembrance.

‘‘It's going to be a very significant event for the city,'' Navy Otago resident naval officer Lieutenantcommander Phil Bradshaw said.

Organisers expect up to 1500 people to take part in a mass march along George St. The march and an attempt at halting the city for two minutes' silence are important elements in an ambitious remembrance programme.

As the organising committee, which comprised representatives of the armed forces, Dunedin City Council and Dunedin Returned and Services Association moved ahead, the event had grown until it was starting to look ‘‘bigger than Ben Hur'', Mr Bradshaw said.

‘‘We are really happy with the way the plans are progressing,'' Dunedin RSA president Jenepher Glover said.

Dunedin Mayor Peter Chin would host an official party led by New Zealand's Vice Chief of Defence Force Rear Admiral Jack Steer, which would include representatives of the British, Singapore and Australian High Commissions, as well as the Embassy of the People's Republic of China. Also in attendance would be Rosemary Jamieson, the daughter and biographer of Lt-cmdr P.G. Connolly, who commanded HMS Deodar during English Channel Convoys in World War 2 and commissioned HMNZS Moa.

Representatives of the United States, Malaysia and Indonesia had been invited, but were yet to confirm, Ltcmdr Bradshaw said.

The major event of Remembrance 2008 would be a massed Returned and Services Veterans and Descendants March along George St on Sunday, November 9. This would commemorate all of New Zealand's military campaigns in chronological order beginning with the Boer War and would include descendants of veterans, the veterans themselves and service people from the army, navy, airforce, police and Red Cross.

‘‘It's going to be a magnificent sight, with hundreds of people marching and military vehicles on George St,'' Ms Glover said.

The march would be followed by an official Remembrance 2008 Church Service at St Paul's Cathedral, a service at Montecillo Veteran's Home and Hospital and a function hosted by the Dunedin RSA.

Dunedin Events team leader Marilyn Anderson said the march would be ‘‘spectacular'' and that her team was working hard to ensure that the relevant road closures and other infrastructure would be in place in a timely manner.

In the lead-up to the march, there would be opportunities for descendants of veterans to have historical medals checked and identified so they could be worn.

On Armistice Day itself, November 11, a simple wreath-laying ceremony at the cenotaph in Queen's Gardens would be followed by two minutes' silence across the city, precisely at 11am.

‘‘The details of this still need to be worked out, but we hope to announce the start and finish of the two minutes' silence with a gun salute that can be heard across the city,'' Lt-cmdr Bradshaw said.

A major campaign would need to be launched through the media and in schools and businesses, to ‘‘spread the word'' and encourage people to participate, Mrs Anderson said.