Residents on edge after campus assaults 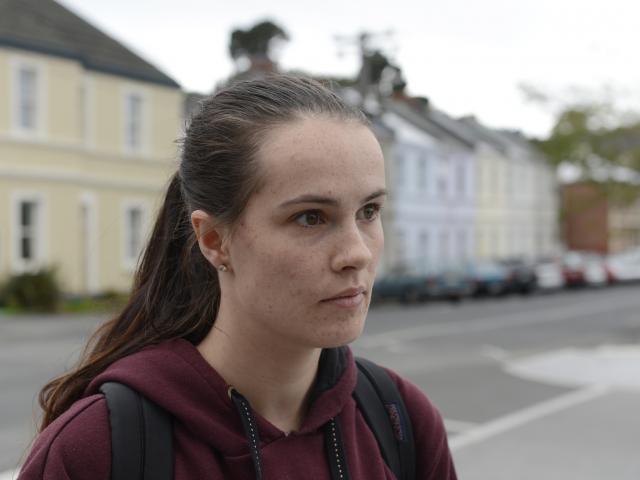 University of Otago fourth-year student Emily Currall says she and other students are on edge following the sexual assaults in the student quarter on Friday night. Photos by Gerard O'Brien.

No-one has been arrested in relation to either attack and police are keeping an open mind on whether the incidents might be linked.

The attacks have left many students in the area nervous.

''I came to Dunedin for the sense of community it provides and that's kind of ruined with what happened.

''I never thought it was something that would happen down here.''

The attacks had caused her to think twice about travelling the campus area alone at night, whereas in the past she had felt confident to walk home unaccompanied when the library closed at 11pm.

''I would definitely think twice about that now,'' the 21-year-old said.

''On Saturday [following the assaults], there were quite a lot of upset and anxious people.

''It makes everyone so much more paranoid and nervous.''

The behaviour of some men in the campus area was unacceptable, she said.

''It's pretty bad. You get hooted at, you get cat-called, but you get used to it, sadly.''

Such behaviour only added to women's anxiety at this time, she said.

''I like a good night out but it's made me question whether it's all worth it.''

Her thoughts were echoed by other female students in the area.

''It's quite close to where we live,'' one Castle St resident, who did not want to be identified, said.

''People are just more aware now that it could happen.''

Like others, she would no longer be walking the area alone at night.

Otago University Students' Association president Hugh Baird said the association was providing support to those involved in the incidents, and extended that support to anyone who had concerns for their safety following the attacks.

''Everyone is quite shocked and concerned, and our thoughts are with those that were involved,'' he said.

The incidents brought into focus the need for greater surveillance of the campus area, which was a ''double-edged sword'' due to the impact it could have on students' privacy.

''When you have scenarios like this it brings into focus the need to have security cameras to catch the perpetrators,'' he said.

Last year, the University of Otago confirmed about 400 cameras were operated by the institution, most of which monitored the inside of buildings, while about 18 focused outwards on public streets or campus walkways.

Asked yesterday if there were any plans to expand surveillance coverage in the campus area, a university spokeswoman said an announcement on security coverage would be made soon.

Police have described the offender in the Dundas St assaults as a man in his 20s with short hair, dark skin, and wearing shorts and a T-shirt.

The man involved in the Leith Way attack was described as being of medium build, 180cm tall with long, dark, curly hair that was tied back.

Police could not provide an update on the investigation yesterday, a spokeswoman said.