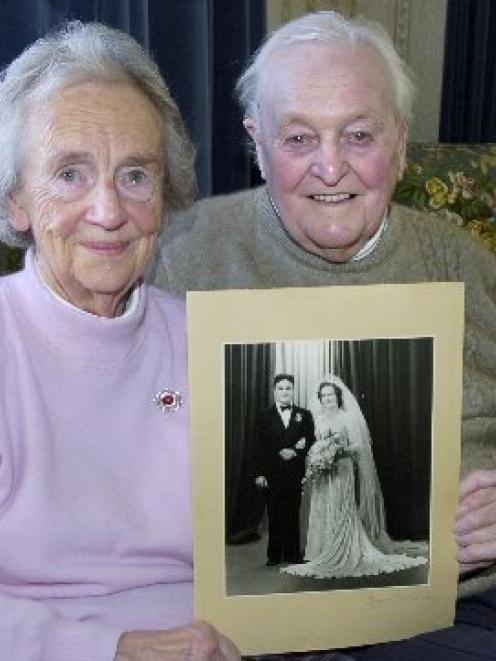 Nan and George Graham yesterday marked 60 years of marriage. Photo by Jane Dawber.
The big question when you have been married for 60 years is whether you would do it all again, says George Graham, who yesterday celebrated the milestone with his wife Nan.

The answer was a resolute "yes".

The Grahams, who met at Dunedin's King Edward Technical College in the 1940s, where Mrs Graham (nee MacIver) studied shorthand and English, and Mr Graham engineering.

The couple married on a fine, frosty day at All Saints' Church in 1950.

In those days, it was hard to find good housing in Dunedin. For the first few years, the couple rented a house in Scotland St.

Looking after its elderly owner was part of the deal.

In 1956, they built their house in Signal Hill Rd, where they remain today.

Mr Graham (83) said he was lucky not to have gone to war, only getting his call-up at the end of World War 2.

After serving his time at the Hillside workshops, Mr Graham moved to the Dunedin Locomotive Department, where he became an inspector, before retiring in 1983.

Mrs Graham (82) worked for Farmers Mutual Insurance for 18 years once the couple's two sons were at school.

The Grahams have enjoyed their involvement with swimming, singing in the All Saints' choir and their holiday home at Waikouaiti.

The biggest change they have noticed in Opoho is the steady development of housing and the encroachment of students into the area in recent years.

They have two sons and four grandchildren, and say they are blessed the whole family is in Dunedin.