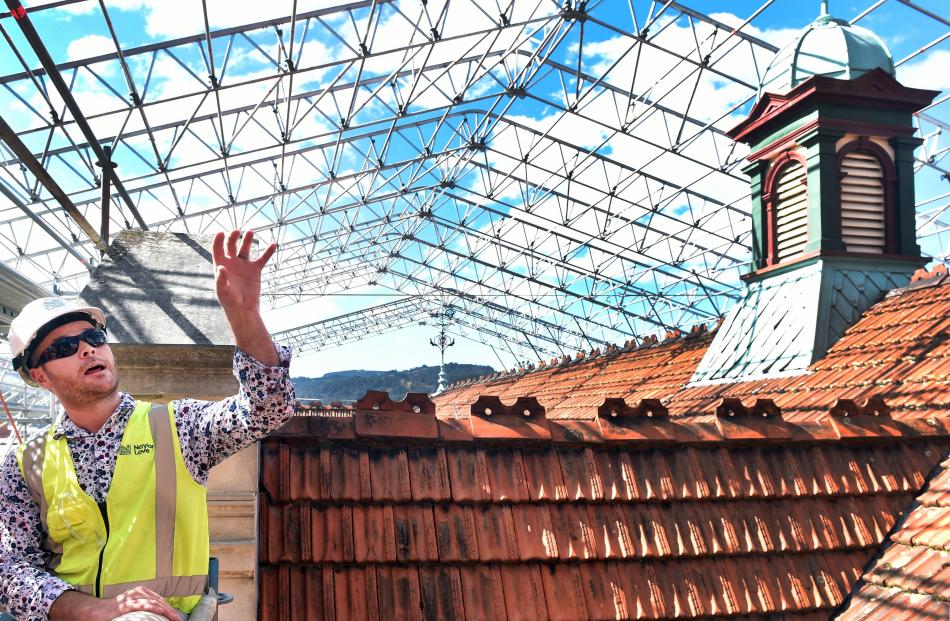 Extensive work on the roof of the Dunedin Railway Station will make sure water is kept out while retaining an aged look for new and reused tiles, points out Naylor Love construction manager Paul Stevenson. PHOTOS: PETER MCINTOSH 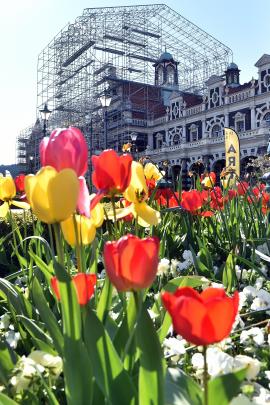 A large amount of scaffolding has been put up around the station, in preparation for the second stage of a three-stage $6.4 million refurbishment. 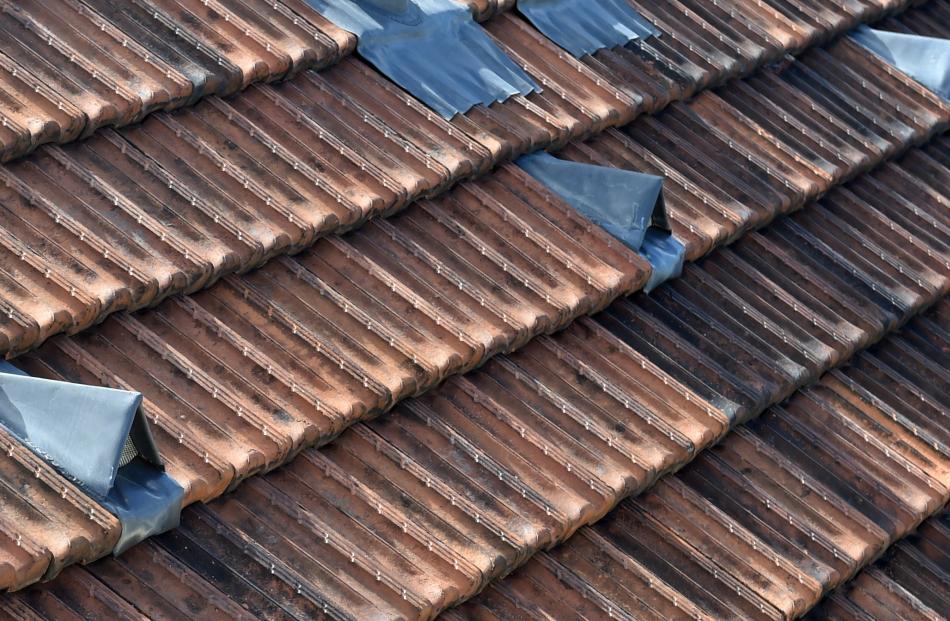 Ventilation tiles have been added to roofing that has been completed at the station. 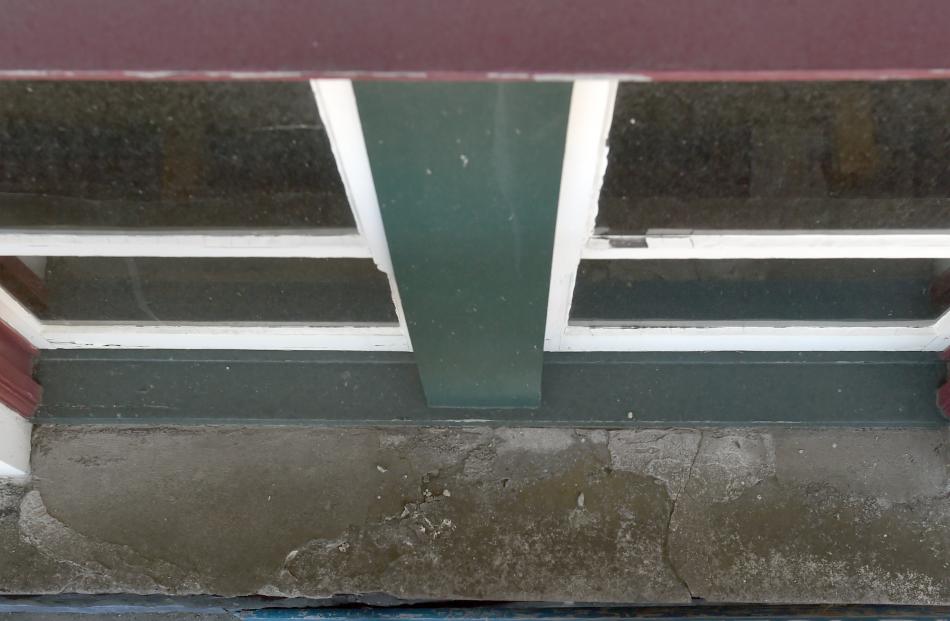 A stone sill at the railway station is one area in need of repairs. 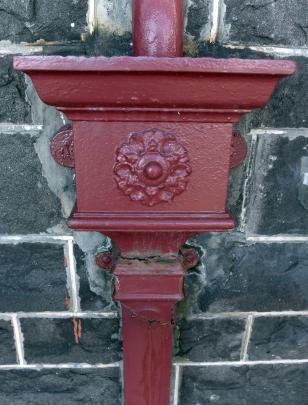 A weather-damaged downpipe will need attention. 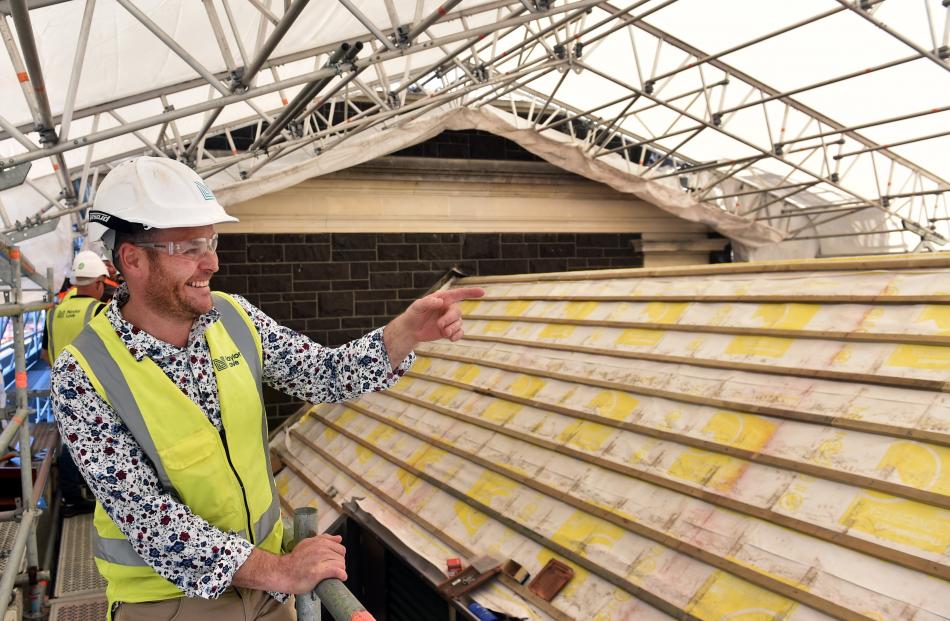 Intricate work to restore the Dunedin Railway Station to its former glory is about to go to the next level.

Naylor Love, which carried out work at the northern end of the station, has secured contracts to finish the $6.4million job.

All three stages of the restoration project involve extensive repairs to the roof of the 115-year-old building, as well as repairs to windows, exterior walls and ornate fixtures.

Naylor Love construction manager Paul Stevenson said patch-up work or temporary fixes had been applied over the years for guttering and some roof tiles had cracked.

However, many tiles could be re-used and they were being supplemented with new tiles that had an aged look.

Tiles were imported from Europe to match the original Marseille pattern.

Stonework was being repointed and sections of the Oamaru stone masonry that had deteriorated would be repaired.

Mr Stevenson said it was a complex project and specialist subcontractors were needed for some aspects, such as leadwork.

The second and third stages of the project are together worth $5.2million.

Heritage consultant Dr Phillip Hartley, of Salmond Reed Architects, was brought in to prepare a detailed survey of the building’s condition and repair needs.

Scaffolding has been put up around the middle section of the railway station, before restoration work starts there.

It will be there for about a year and care has been taken to work around the Cobb & Co restaurant which operates at the station.

The building, nicknamed the Gingerbread House, is one of Dunedin’s best known and photographed.

The restoration work would enable the station to be in good shape for many years to come, he said.

The refurbishment is due to be completed in 2023.

All it needs now are trains - this must be the biggest and grandest railway station in the world that has no scheduled passenger services - it is a disgrace that we can't go (at least) from here to Invercargill or Christchurch by train.

Would be good if we even had the Taieri Gorge train running properly but guess what. We have DCC!