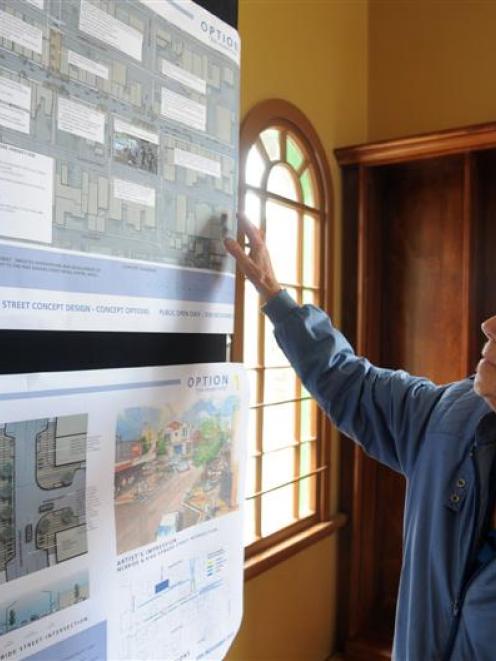 Phyllis Munro, of South Dunedin, considers one of the redevelopment choices for the retail centre during this week's information day. Photo by Peter McIntosh.
"South Dunedin is a wonderful place, but it needs a bit of tidying up."

The council, and engineering consultancy firm Beca Carter Hollings and Ferner, commissioned by the council, unveiled three options at the Gasworks Museum.

Mrs Munro, who, aside from some time overseas, has lived in South Dunedin all her life, said she liked all three "fabulous" redevelopment options.

She would like to see new buildings in the area, to liven up one of Dunedin's oldest precincts.

It would be good to see more "artistic" developments, and an emphasis on public trees and gardens, she said.

South Dunedin mother-of-five Mary Alice Burke liked the emphasis on pedestrians, which would make it safer to cross streets with small children.

However, what the area most needed was a public library, she said.

Beca urban designer Annette Jones said it was likely the final proposal would be an amalgam of all three, based on aspects people liked.

Local residents have about three weeks to provide informal feedback.