Retirement after 54 years - on the third go 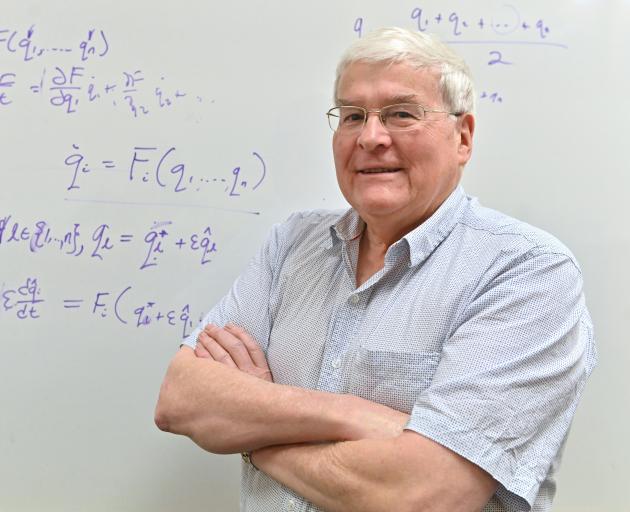 Associate Prof John Harraway (76) reflects on his long career. Photo: Linda Robertson
Associate Prof John Harraway has taught for 54 years in the University of Otago's mathematics and statistics department and is  a former president of the International Association for Statistical Education.  He talks to reporter John Gibb about his long career and his third and final retirement.

John Harraway's career highlights the remarkable power of statistics to unravel mysteries in everything from foetal alcohol spectrum disorders to the secret lives of spinner dolphins in the Red Sea.

At the end of this year, Associate Prof John Harraway will retire from the University of Otago mathematics and statistics department for the third and final time.

Meanwhile, in his 54th year in the department, this specialist in statistics is still cheerfully teaching, now part-time - a second semester class in multivariate analysis, if you want the details.

And this year he also is putting in some more hard work in providing further statistical support for fellow Otago researchers, as he rounds off an academic career which has shown how statistics can deepen understanding of many key matters, including foetal alcohol spectrum disorders (FASD), and the protection of high-value food, including New Zealand manuka honey, against the threat of food counterfeiters.

Prof Harraway, who has an Otago University BSc (hons) and an MSc, is clearly good with numbers, and also clearly remembers the details of all three of his retirement events.

The first ''retirement'' function was mid-2016, put on by the Otago Division of Sciences to honour the completion of 50 years teaching statistics at the university.

The second ''retirement'' celebration, in mid-2017, was organised by the Otago department, given his intended retirement at the end of that year.

But he was still teaching the following year.

The third ''retirement'' was mid last year, when a colleague, Dr Matthew Parry, arranged a ''Festschrift'' publication for him.

People came from far and wide in New Zealand, and the president of the International Statistics Institute came from Australia. But this year, Prof Harraway has continued to teach a class, and he had been completing the collaborative statistics work required by fellow Otago researchers.

He would be retiring fully at the end of this year, but was already helping to support various charities through his membership of the Lions Club of Dunedin Host.

It was satisfying to raise funds for ISIS at Wakari Hospital, Land Search and Rescue, Daffodil House, Women's Refuge and others, he said.

Asked about the power of statistics to shed new light not only on foetal alcohol spectrum disorder, and the Otago chemistry department's food authenticity testing work, Prof Harraway said statistics involved working with data, and from this reaching conclusions which were ''relevant to many important problems arising in society''.

Researchers consulted the statistician and the work was collaborative.

Over the years Prof Harraway has also had a strong involvement with Selwyn College, and was last year elected a life member.

In 1970 he was appointed senior resident at Selwyn, and served as acting warden at the college (1971-1988), including while continuing to work full-time in mathematics and statistics (1977-1980).

He left Selwyn in 1990 but remained a member of the college's board of directors until last year.

In the first half of his long career he showed his ability to teach extremely large statistics classes, sometimes of more than 1000 students, a task he found ''very enjoyable''.

''Always nervous for the first lecture at the start of each year, but it all fell into place every year.

''I enjoyed good interaction with the large classes. ''

''We have the highest achievers in the age group coming to this university, and it's a pleasure to teach them.

Prof Harraway has become a well-known teacher at Otago University, but has also become well-known in international statistics circles for his work in promoting international collaboration to improve statistics education and teaching in developing countries, including in Africa.

''I became very well known around the world in the area of statistics education, as did the University of Otago.

''I enjoyed placing an emphasis on application of statistics to significant problems.''

In one of several previous interviews with the Otago Daily Times, Prof Harraway said that while some people found statistics utterly dull, he was determined to prove them wrong.

He highlights the vital role played by statistics in analysing problems and helping overcome challenges in many vital fields, including in human health and environmental management.

And he pointed out that New Zealand was one of the world's leaders in statistics education, through a strong emphasis on the subject in secondary schools.

Prof Harraway began his long involvement with the Otago department of mathematics and statistics when he was appointed as an assistant lecturer in 1966.

''Teaching has been a rewarding interest over all the years.

''I probably lectured to half of the students in Selwyn, and in the evenings they would come to me with questions in mathematics and statistics which meant I got to know the students very well.

''They are now in prominent positions all round the world and New Zealand.''

A few years ago, he reflected that although he had been teaching at Otago for half a century, he could easily calculate the number of sick days he had taken in that time - zero, because he enjoyed lecturing so much.

He had a brush with prostate cancer last year, but that was caught early and dealt with successfully, enabling him to recover good health and to continue to wind up his collaborative research projects this year.