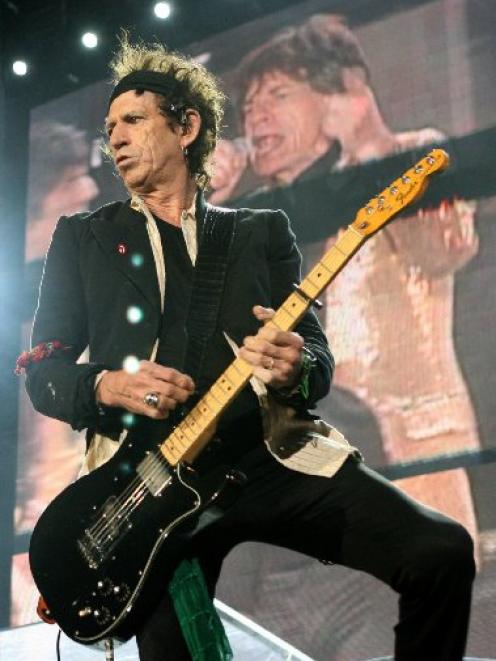 Keith Richards plays with the Rolling Stones at Western Springs, Auckland. Photo from NZ Herald.
Professional colleagues of Robin Bain have told the High Court at Christchurch about their concerns for him in the months before his death.

Three school principals who were in the Taieri Principals Association with Robin Bain were some of the first witnesses called by the defence in the trial of 37-year-old David Bain for the June 20, 1994 murders of his parents, two sisters and younger brother.

The witnesses described the physical changes they noticed in Robin Bain as well as his growing frustration and unhappiness at not being able to obtain a better teaching position.

He was looking unkempt, his clothing was scruffy and unprofessional and he was becoming smelly. 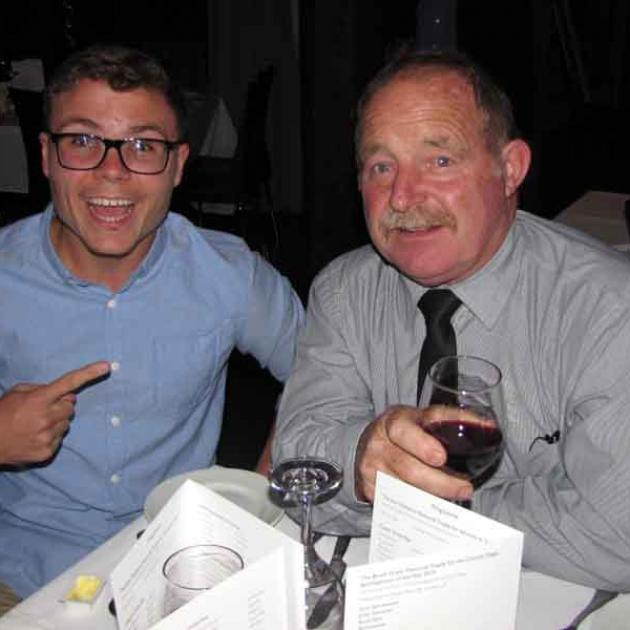 Mackay Caulfield of Botswana, and Danny Winstanley of Cromwell.
Robin Davidson, principal at Brighton School, recalled Robin Bain looking unwell, pale and emotionally flat at a meeting of the association in May 1994.

She said he seemed to have lost confidence.

During a discussion about the movement of teachers, Robin said he had "had enough", that he had applied for various positions and not got an interview.

The principals were aware of other teachers also feeling a bit trapped, but their main focus was Robin Bain, Mrs Davidson said.

"I could see this was wrenching him apart."

A seminar was organised for July 1, when an adviser from the College of Education was going to discuss career options.

Mrs Davidson was one of three local principals who went to the Taieri Beach School after Robin Bain's death.

She described the school as a "shambles", with no evidence of any teaching programme for his pupils.

The office was chaotic, with mail, mainly unopened, other papers and various items, piled everywhere.

Mrs Davidson also became aware of some disturbing and graphic stories which had been published in the school newsletter which was sent out days before the Bain family was shot.

Malin Stone, then principal of Berwick School, told the court he had used Robin Bain as a mentor.

"I found him extremely motivated, and very laid-back, which was interesting for me as I was `pretty uptight' as a new principal," Mr Stone said.

They worked closely together, as both were interested in computers.

Robin was at the forefront of computing in the Otago area at that time.

"He was streets ahead of anyone else I knew.

"And he was using computers a lot in the classroom."

Robin was motivated and interesting, had a great sense of humour and was fun to be around.

When both schools were at a camp at Berwick Forest, Robin essentially did nothing apart from on the first day.

He was quiet, seemed caught up in his own thoughts and was not motivated.

"He seemed to have lost a lot of interest," Mr Stone said.

He thought Robin was discouraged because he knew he could not advance any further in his career.

He recalled him becoming angry and aggressive at a meeting at the Teachers College, virtually abusing the lecturer.

Mr Stone described it as "very out of character" for Robin, who seemed to have changed dramatically from the way he had been.

The Robin Bain he had known was "fazed by nothing".

Mr Stone said he went to the Taieri Beach School the day after Robin's death and found the classroom "a shambles" and "everything a mess", with no evidence of planning, no programmes of work and everything "dishevelled".

Kevin MacKenzie, from St Mary's School in Mosgiel, described Robin being more "negative and down to it" in early 1994.

He vividly remembered Robin's appearance at the Taieri Principals Association May meeting.

Robin was quite dishevelled, his hair was all over the place and he was not dressing like a professional colleague.

"And he looked gaunt and down to it."

He was also "a wee bit smelly".

He described Robin as seeming "totally different from when I first knew him as a colleague".

When he went to the school with Mrs Davidson after the June 20 shootings, he found Robin's classroom "pretty shambolic", generally messy and with very little children's work anywhere.

Mr MacKenzie also expressed concern at some violent stories published in the weekly school newsletter sent out the Thursday before the Bain family were killed.

One of the stories was about a porcelain doll and a family of five who were all murdered, some of them by being shot.

Mr MacKenzie said he could not believe a principal would encourage the writing of the stories and publish them in a school newsletter.

It was "totally weird and unprofessional", he told defence counsel Michael Reed QC.

Malin Stone and Kevin MacKenzie give evidence during the retrial of David Bain.