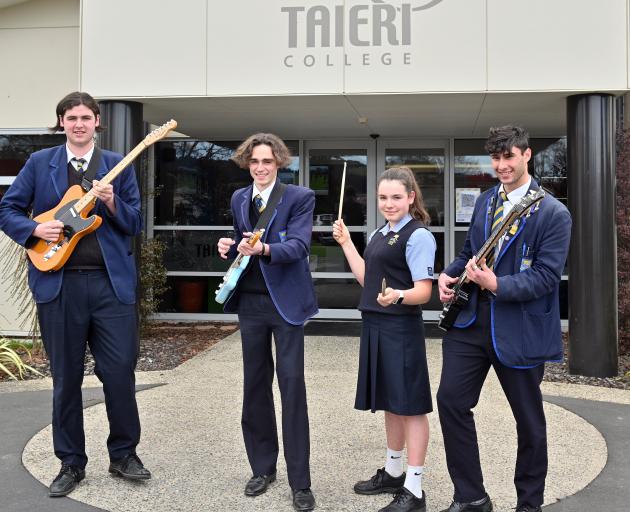 Schlappers band members (from left) Liam Boyne (17), Hamish Burgess (17), Keisha Hollands (14) and Roshan Dixon (17), of Taieri College, are one of four southern bands in the top 20 of the 2020 Smokefreerockquest. PHOTO: LINDA ROBERTSON
Four southern rock bands are back in their studios, rehearsing with renewed vigour, after being named in the top 20 bands for the 2020 Smokefreerockquest.

In its 33rd year, Smokefreerockquest is recognised as the launching pad for many great Kiwi musicians including Kimbra, Alien Weaponry, Marlon Williams, Six60, Broods, Brooke Fraser and Anika Moa.

Gore High School’s 46South was one of five bands which narrowly missed the cut, but was highly commended by the selectors.

Rockquest general manager Matt Ealand said this year’s competition attracted more than 600 submissions in the band and solo-duo categories, despite disruptions caused by the Covid-19 pandemic.

Rather than compete in heats in front of live audiences, this year’s participants had to enter online, in order to fit n with restrictions concerning public gatherings.

Although Covid-19 had caused major changes to the format of the competition, Mr Ealand said the entrants had a lot to gain by taking part in the programme.

"At its heart, Smokefreerockquest is about providing a platform to develop and exhibit the skill and creativity of young songwriters.

"It has been heartwarming to see the entrants adapt so quickly to work with the online model, and the community of friends, whanau and fans that have come online to support and encourage them."

Mr Ealand said the top 20 bands were now making video submissions, hoping to be selected as one of the top seven bands — which will join the top 3 solo-duos as national finalists.

The national final will be streamed online on September 24.