Sailors at centre of outbreak depart

By Mike Houlahan
0 Comments
International mariners at the centre of a Covid-19 outbreak have boarded their ships and left Dunedin.

A group of 235 sailors from Russia and Ukraine had been brought to New Zealand to crew local vessels, but during their time in isolation in Christchurch 31 came down with Covid-19.

It is understood some of the sailors were brought to this country to replace the crew on two vessels berthed in Dunedin since early October, Aleksey Slobodchikov and Te Raukura.

The two ships are operated by Maruha, part of the consortium of fishing companies which brought the international crew to New Zealand and paid their quarantine costs.

Those expenses got higher a fortnight ago after two health care staff at the facility tested positive for Covid-19, a discovery which resulted in the sailor’s stay in Christchurch extended by several days.

"While it is clear the infection came from the mariners, investigation continues to see if we can find out more about how the possible infection occurred."

The ministry had said the sailors would not leave quarantine until it was satisfied they posed no health risk to anyone. 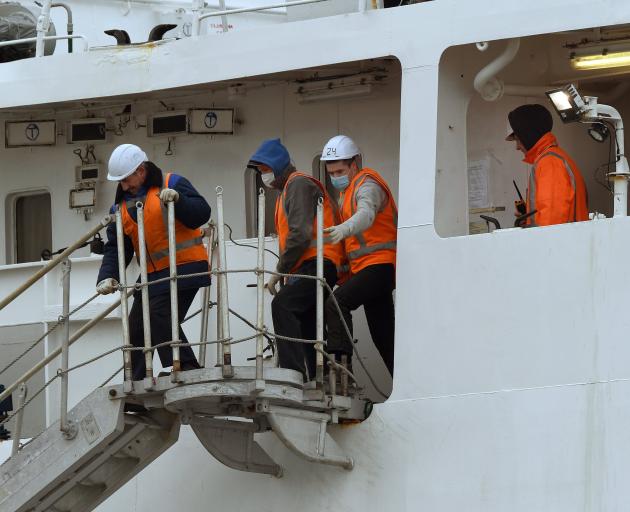 On Saturday, it confirmed all the sailors had been released to their vessels.

Seven mariners initially remained behind, and of those three were now considered to have recovered and had been cleared for release.

"One additional mariner has remained behind after reporting symptoms during their departure health screening.

"They have been tested and returned a negative result, but will need to be symptom-free for 48 hours before being cleared to depart."

Yesterday, New Zealand reported six new cases of Covid-19 — five in managed isolation and the sixth a close contact of an Auckland quarantine worker who tested positive on Friday.

The defence force confirmed yesterday that the pair were employed by it; one is a civilian and the other is in the military.

"The civilian is based in NZDF headquarters Defence House in Wellington and travelled from Auckland to Wellington on flight NZ457 on Thursday evening," vice chief of Defence Force Air Vice-Marshal Tony Davies said.

"They sat in row 23, and all passengers sitting two seats in all directions are being contacted, asked to get tested and to self-isolate until November 19.

"Their households have also been advised to self-isolate until the passengers receive a negative test."

The Ministry of Health last night released a list of places in Auckland and Wellington for contact tracing of the two people.

"This case once again reinforces the importance of everyone who is able to using the app to keep a record of where they have been," a spokeswoman said.

"It allows our contact tracing team to quickly notify you if you may have been exposed to this virus, and allows you to take immediate action to protect yourself, your whanau, and your community."