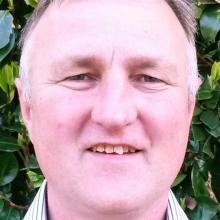 Richard Dawson. PHOTO: ODT FILES
A religious leader who petitioned the Southern District Health Board for a separate Christian chapel to be included in the new Dunedin Hospital is furious the board swiftly rejected that call yesterday.

The SDHB executive leadership team had asked the board to endorse its decision to build a single multi-faith centre in the new hospital and reject a plea from Leith Valley Presbyterian Church minister the Rev Richard Dawson and 52 others that a Christian chapel also be included in the design.

The DHB did not spend long discussing the question, reaching rapid agreement to endorse the multi-faith centre decision.

Mr Dawson was disappointed but not surprised, and vowed to continue the fight.

"I have had virtually no response from them at all to our petition, and their ability to consult with the wider public seems to be negligible," he said.

"We have serviced that hospital for well over 50 years, virtually free of charge."

The chaplaincy service at the hospital had 2.5 staff, which the SDHB provided $30,000 a year towards, Mr Dawson said.

"Those chaplains are basically paid for by the church and they have worked in that hospital and for that hospital for all that time, and to ignore our request and our desire for consultation, it shows their desire to consult with the public is virtually nil."

The current chapel on the ground floor of the hospital is open to all, but holds Christian services every Sunday.

New Dunedin Hospital project director Hamish Brown told the board that management had tried to provide a "neutral and respectful approach to what is a complex and sensitive issue".

The multi-faith centre approach reflected modern health practice, and there was not enough space in the proposed hospital design for two chapels.

Board member Tuari Potiki said he supported the recommendation, and said the University of Otago operated a similar multi-faith prayer room.

"I think it’s inclusive, it’s practical, it sends the message that we should get on with each other."

Mr Dawson said the university situation was not comparable to the hospital, as the chaplain’s room had been rebuilt for Christian ministry as part of the prayer room development.

There is space available in a shared faith area, but this guy doesn't want to share it with other religions.
I suggest he calms down and considers just how wrong his stance is. The SDHB are very much in touch with what people want. That being a hospital, with space for anyone to pray, not a monument to division and exclusion with a few hospital beds on the side.

Maybe he would like a Christian only ward too. What is it about religion and division? Oh, hang on.....

Matthew 6:5-6
“And when you pray, you must not be like the hypocrites. For they love to stand and pray in the synagogues and at the street corners, that they may be seen by others. Truly, I say to you, they have received their reward. But when you pray, go into your room and shut the door and pray to your Father who is in secret. And your Father who sees in secret will reward you. "