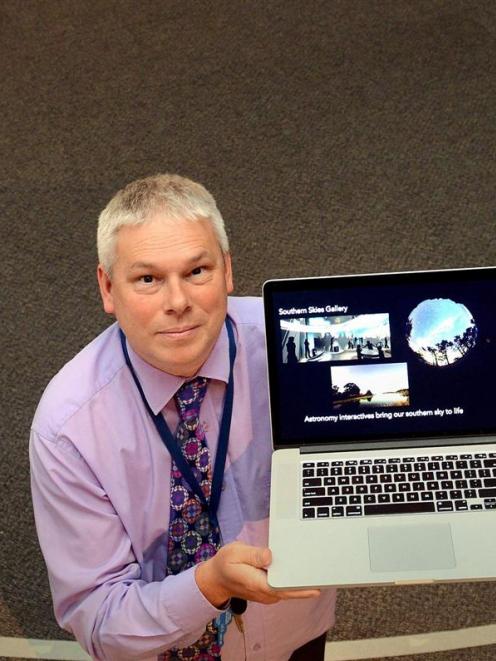 Ian Griffin earlier this year stands at the site of the planetarium project at Otago Museum. Photo by Peter McIntosh.
The Dunedin City Council is to investigate ways of limiting light pollution, after councillors were told Dunedin could become the world's largest ''dark sky city''.

Otago Museum director Ian Griffin spoke about the issue of light pollution at yesterday's planning and regulatory committee meeting when he discussed the museum's planetarium development, which is to open later this year.

''We see the planetarium as not just a brilliant educational tool [but also] potentially an anchor for a new strand of tourism in this city.''

There was a massive potential for growth in night sky tourism in the city and the council could support that by acting to limit light pollution in areas such as Otago Peninsula, where viewing conditions were best, Dr Griffin said.

''Dunedin could be the biggest city in the world to be a dark sky city,'' he said.

After being asked by Cr Neville Peat what the council could do to support night sky tourism, he said it could ensure that when the city's street lights were replaced the new lights did not give out more light pollution than the current ones.

Tekapo, which had rules in place about light pollution, was estimated to gain between $15 million and $20 million a year from night sky tourism. This was despite the disadvantages of its location.

''Tekapo is four hours from the nearest airport and the infrastructure in Tekapo can't really accommodate large numbers of people.''

After the planetarium opened later this year, the museum would offer ''experimental'' night sky tourism opportunities, in which people would visit the new facility and then be taken to Hoopers Inlet or Papanui Inlet, to view the night sky through a telescope.

After earlier questions on the issue from Cr Lee Vandervis, Cr Kate Wilson asked if staff could look at the possibility of including light pollution stipulations in consent requirements for new developments.

Cr Vandervis took that further and asked whether staff could look at ways of addressing existing light pollution.

''I know, for instance, there have been a lot of complaints around Port Otago light spill down at Port Chalmers,'' he said.

• It was previously reported that the $1 million planetarium and immersive theatre was due to open in October.