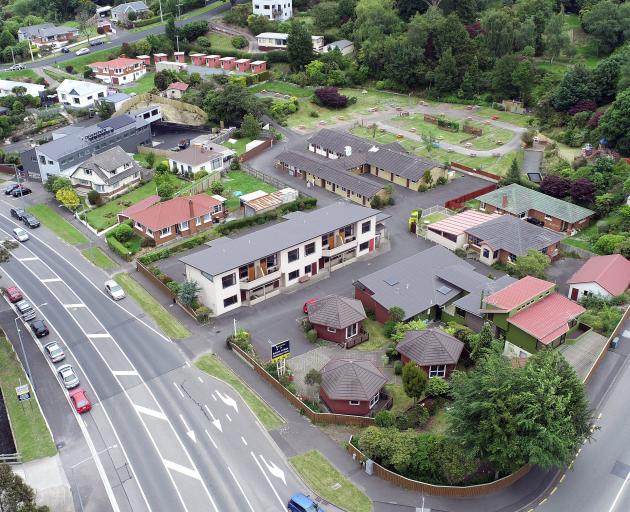 Temporary fencing was being installed around the property.

Furthermore, if all of about 100 SIQ spots in Dunedin were full — and Aaron Lodge was full — Covid-19 would be rife in the South, Mr Fleming said.

"I actually think that the measures and precautions that we all need to take ourselves are more important than the measures that we put around Aaron Lodge.

"With ‘self-isolation’ anyone in our community might be isolating at home.

"So you need to take the measures to protect yourself — be vaccinated, scan in, use of masks ... good hygiene and you should be fine."

About 15 members of the community met SDHB leaders on Tuesday after an SDHB letter drop on Monday informed about 40 neighbours of the Kaikorai Valley Rd property that it had been secured as an SIQ facility through a short-term lease with the property’s new owner, Kainga Ora.

Mr Fleming described the meeting as at times tense, but he said people having concerns was natural, "and quite naturally understood".

He said he accepted it was short notice for the community, but the plans had fallen into place over the past one or two weeks.

Mr Fleming did not think there would be people at Aaron Lodge over Christmas.

People who caught Covid-19 could now self-isolate at home, but those with homes where it was not safe for them to be — including small homes with a single bathroom — would need somewhere to stay, he said.

Public health advice he received was there was "no risk" of Covid-19 transmitting across property lines in an outdoor setting, but temporary fencing at Aaron Lodge was due to be erected yesterday, set back from neighbours where appropriate.

"We listened ... and temporary fencing is being installed," he said.

"We did highlight this is ‘self-isolation’ it is not a managed isolation facility where there’s six-foot fences and military guarding the site, effectively.

"This is self-isolation and we do risk-assessment of anyone who goes into isolation and if there’s extreme risk people, we would be sending them to MIQ in Christchurch."

At Aaron Lodge, security could be put in place if the public health team believed there was a risk that a person would leave or be non-compliant.

A security team was under contract and measures could be put in place with "a phone call".

Other southern SIQ facilities were confidential but he was relaxed that the location of this one was known.