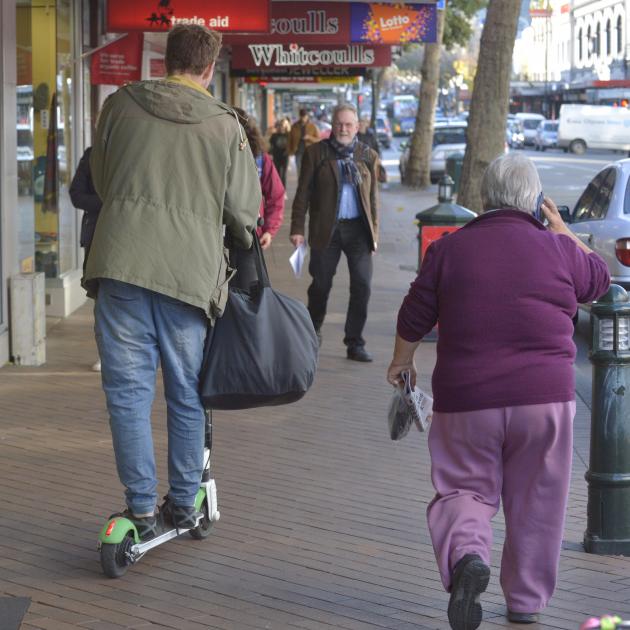 Weaving between pedestrians, a Lime scooter rider makes his way down George St using the footpath yesterday. Under a new proposal from the Dunedin City Council, there would be a voluntary 15kmh speed limit for e-scooters on the footpaths in parts of George and Princes Sts. PHOTO: GERARD O'BRIEN
Dunedin's busiest footpaths may soon have speed limits for e-scooters but any enforcement will come down to the riders themselves or members of the public.

A 12-month trial of a ``footpath courtesy zone'' is being proposed by the Dunedin City Council for the footpaths along George and Princes Sts from Albany St to Rattray St.

A 15kmh speed limit would be voluntary and there would be no penalties for people found breaking it.

It would also apply to skateboards and other non-motorised scooters.

Councillors will vote on whether to adopt the proposal at a full council meeting on Tuesday.

The move was prompted by a request from councillors frustrated at the lack of enforcement tools available to them.

Council community services manager Simon Pickford said while the courtesy zone lacked ``teeth'' he hoped it would lead to self-enforcement and public-enforcement.

If successful, the courtesy zones could be extended to other busy pedestrian areas, Mr Pickford said.

At this stage there were no plans to ask Lime, which has 700 e-scooters in the city, to use geo-fencing technology to automatically restrict speed in the area, as the Auckland Council had done.

Measures could be developed as the trial progressed, he said.

A review of the council's mobile trading bylaw was also under way which aimed to provide greater controls over the use of e-scooters.

Any revised bylaw was expected to come into force about March next year.

Another e-scooter company, Singapore based Beam, had formally contacted the council about possibly operating in city, but had not given a launch date, he said.

Lime New Zealand public affairs manager Lauren Mentjox said the company supported the plan and had a good working relationship with the council.

Since the service was launched in January more than 300,000 trips had been made by more than 52,000 riders and the number of private e-scooters had also increased.

'A 15kmh speed limit would be voluntary and there would be no penalties for people found breaking it.' So, a waste of time then. Lime should be the ones made to pay for infringements which they could then recover from their tracked client. Failure to pay would mean the client would no longer have access to the scooters. Simple and effective enforcement would be best practice and desirable from a company whose claim is 'Safety is our number one priority'. By the way, a direct hit from a scooter travelling at 15k and carrying a 100 kilo rider could still have serious consequences for any innocent pedestrian going about their business by walking on a city pavement.

Another pointless exercise from the DCC. When are they going to grasp the nettle and ban these things from the pavements before someone gets badly injured?
We have miles of unused and pointless cycle paths; make them use them and keep them away from pedestrians.

I love how they zip around at break neck speed. It’s as if the Green Party issued a license to kill (pedestrians). The hypocrazy has not been un noticed. Along with the empty green bike highways, resembling somewhat human meat grinders. Madness.