Dunedin churchgoers have started cleaning up after a fire broke out in the roof of St Paul's Cathedral early this morning.

Large areas of the building have been damaged, but it is hoped services could resume as early as tomorrow.

Firefighters were called to the Anglican cathedral at the corner of Moray Place and Stuart Street about 3.30am. The smoke and flames died down before dawn, and slate tiles were removed to ensure the fire was out.

They did not know what caused the blaze but said there were no signs of arson at this stage.

Dean of Dunedin's St Paul's Cathedral, the Very Reverend Dr Tony Curtis, rushed to the cathedral less than an hour later and found firefighters asking what he would like to try ro salvage.

Very reverend Dr Tony Curtis. Photo: RNZ
He said it was less than a week after the completion of months of work.

"We want to make it safe. Our priority is to make sure everybody's safe and that the building's safe itself. We then want to get operational as quickly as possible. This isn't going to stop us," he said.

The sodden carpet from the apse of the cathedral, towards the high altar and choir pews, has been littered with ash. The main damage was overhead however, with the sky visible through holes in the roof.

Down in the crypt beneath the apse - where worshippers and the wider community hosts functions, yoga, tai chi and youth groups - water has pooled on the floor after dripping down.

Curtis said they hoped to have bands play in the crypt, but that would be on hold while they cleaned up and repaired the damage.

"We'll have to get a full electrical assessment done. There will be quite a lot of work to clean up, we'll maybe look at how we make the building a better building for the use of the community as we restore it from this," he said.

"So hopefully some good will come out of all of this."

He thanked the emergency services for protecting the historic cathedral.

Cathedral director of music Michael Grant raced down when he heard the news - with the 100-year-old organ not far from his thoughts.

"There's not as much damage done to the organ as we originally thought may have happened with the water and things like that. But luckily, it's superficial damage and with a little bit of tender love and care, it will come right again very soon." 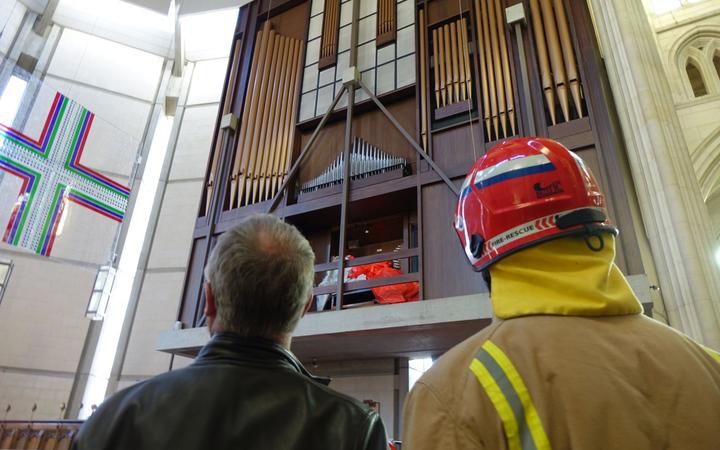 Photo: RNZ
The brand new piano - which arrived less than two weeks ago - was unscathed.

Lay minister Bruce Aitken arrived to find churchgoers gathering to see the state of the building.

"I could tell that it was nothing like the absolute travesty of Notre Dame and some of the other terrible fires around the world. So there was a great feeling of relief. We will carry on. Today's services have been cancelled but hopefully they will be on again tomorrow," he said.

Their hoses breached the roof and ceiling while fighting the fire, he said.

"But we're very fortunate that the damage has largely been restricted to water damage and our crews have done ... a fantastic job at salvaging items and moving items with the space of the cathedral to protect them."

Fire crews still didn't know what caused the blaze - an investigation was now under way and the results were expected in the coming weeks, he said.