Skip monitoring gets off to lively start

By Emma Perry
0 Comments
The first day of skip monitoring in the student area did not go quite to plan, as video footage of an altercation between a security guard and a man emerged. 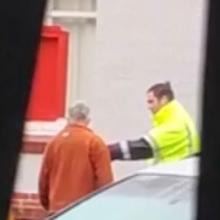 A still from a video shows a security guard and an man arguing over skip access yesterday. IMAGE: SUPPLIED
The University of Otago announced this week it would hire security guards to monitor 11 skips for the following three Fridays between 7am and 4pm, due to their rising use.

One hour after patrolling had started yesterday, a scuffle broke out at one of the skip sites in the student area.

A student who filmed the interaction said he heard noises outside his window in Leith St North about 8am.

"I thought someone had been drinking and was yelling, but after listening realised it was an argument."

A man had brought his wheelie bin over to the skip and the heated exchange then took place with the Allied Security guard.

"After the guard explained more, the guy realised he was in the wrong and he walked away."

University of Otago property services director Dean Macaulay said the aims of the security included ensuring that only student waste and general waste, including furniture, went into the skips, and that waste did not pile up around the skips.

Last year, unsupervised skips in the student area were replaced "many times" each day and one skip needed to be replaced 13 times in one day.

Skips collected 375 tonnes of waste last year and were costing the university about $90,000 annually.

A university spokeswoman said yesterday it would not comment on what the cost of hiring security was, as the information was commercially sensitive.