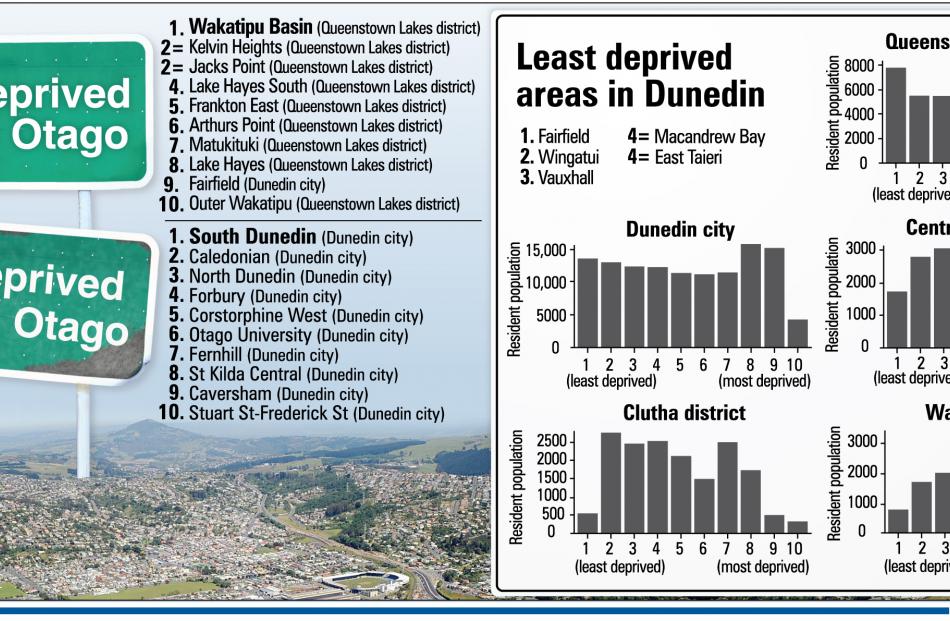 The 2013 Socioeconomic Deprivation Index shows little has changed in the patterns of poverty in Otago, Timothy Brown reports.

The results of the latest Socioeconomic Deprivation Index show areas from Queenstown Lakes are among the least deprived in Otago, while Dunedin's southern suburbs are among the most deprived.

Very little had changed since the last deprivation index was produced in 2006 and that was to be expected, co-researcher and University of Otago health sciences pro-vice-chancellor Prof Peter Crampton said.

The data, released last Friday, provided a thorough analysis of relative wealth and poverty within New Zealand and incorporated factors such as income, employment, home ownership, home size and home access to the internet.

Areas such as South Dunedin and Caledonian, which were among the most deprived 10% of areas in New Zealand, had been there since the first index was produced after the 1991 census.

''The underlying patterns of wealth and poverty are slow to change and the geography of poverty doesn't change rapidly,'' Prof Crampton said.

It would take generations for the most deprived areas to have increased access to jobs, income and services to change the socioeconomic ''character'' of the areas, he said.

Areas such as the Otago University area, which had moved from a deprivation score of 10 to 9, had experienced some change but ''that movement is minor and doesn't indicate a change in the area's character'', he said.

''The overall theme here is one of underlying stability [in deprivation],'' he said.

The census data on smoking showed the prevalence of smokers in an area was a good indicator of area deprivation.

The data would be used to allocate government funding for health and other social services.

• First produced following the 1991 census.
• Areas are assigned scores of 1-10. Each score level represents 10% of the country. Areas with score of 1 among least deprived 10%; areas with score of 10 are among the most deprived 10%.
• Used to allocate government funding and for research.
• Each area has population of at least 100 usually resident people. 23,751 such areas were represented in the 2013 Socioeconomic Deprivation Index.