Passengers on an Otago Harbour cruise boat saw a rare sight on Monday — a dwarf minke whale off Taiaroa Head.

The next day, two more whales stopped by, and yesterday a pod of orca came to visit.

The minke, seen by passengers on board Port To Port Cruises and Wildlife Tours’ Sootychaser, was about 5m long and seemed to be feeding near Lighthouse Bay, as it was swimming in circles, firm owner-operator Rachel McGregor said.

Department of Conservation Otago coastal ranger Jim Fyfe said from viewing the picture, it was most likely a dwarf minke, which was not a common sight.

"It is certainly rare."

One of the two humpback whales spotted at Taiaroa Head on Tuesday. PHOTO: MIKE WILLIAMS

He recalled the Otago Daily Times reported a sighting of a minke whale in the Otago Harbour on the same day in 2008.

"I was quite entertained by that ... It sounds like it’s got its itinerary sorted out."

In October 2015, one washed up on Katiki Beach.

"There is a presence of them offshore ... and occasionally they obviously pop in to see what is going on in Dunedin." 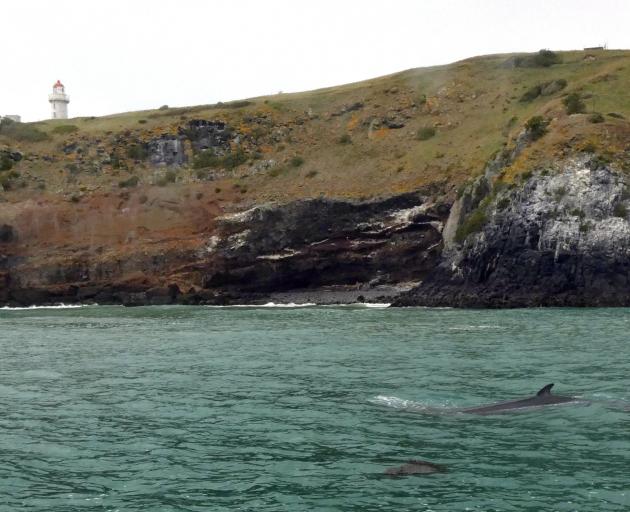 A dwarf minke whale seen by passengers on board Port to Port Cruises and Wildlife Tours’ Sootychaser off Taiaroa Head on Monday. PHOTO: RICHARD TIMONEY

In 1873, the skeleton of a minke was sent by Otago Museum keeper Frederick Hutton to the British Museum in London, where it was examined and named B. huttoni in his honour.

That was also in October, Mr Fyfe said.

"We have got a tradition."

Prof Ewan Fordyce, of the University of Otago geology department, said minke and humpback whales travelled to southern waters to feed at this time of year.

That annual migration most likely explained why there tended to be more sightings in October.

Whales were going through New Zealand waters every day — but only some were spotted by the public, he said.

"They are quite spectacular when you see them going by."

Recreational fisherman Colin Goldthorpe found himself joined by a pod of orca — part of the dolphin family — about 30km off Cape Saunders yesterday.

"For about half an hour, they travelled through in singles or small groups of four, five, or six.

"They were underwater looking at us — they came up to us — I had the boat turned off just sat there waiting."

Mr Goldthorpe had only seen orca one other time in 20 to 30 years of taking his boat out in that area of the sea.