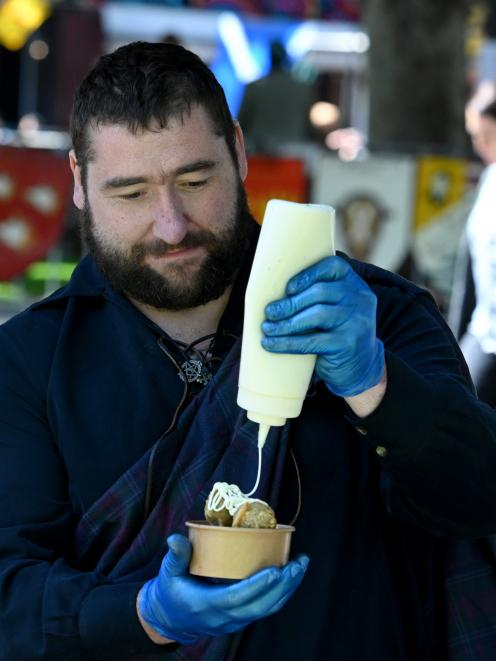 Bracken Restaurant owner Dave Burt drizzles whisky mayonnaise on to haggis balls.
For City of Dunedin Pipe Band drum major Andrew McLellan, November 30 is one day he knows the band will be called upon.

"It has become a regular feature on the calendar. The band has a number of standard tunes we play for parades, gigs, whatever it might be, the tunes people relate to and are familiar with. But it is also a chance for our members to play some of their competition pieces."

Membership of what is arguably Dunedin’s principal vehicle of Scottishness fluctuates, but the band can call upon up to a dozen pipers and almost as many drummers to fill its ranks.

Hearteningly, many of its members were young, Mr McLellan said.

"It’s good, but we are always on the hunt for young learners.

"It is very much a young person’s thing, right around the world."

If pipes and drums were not their thing, there were plenty of other activities for lads and lassies such as a Celtic storyteller and junior Highland games featuring a lightweight plastic caber and putting stones which looked a solid enough test for young muscles. 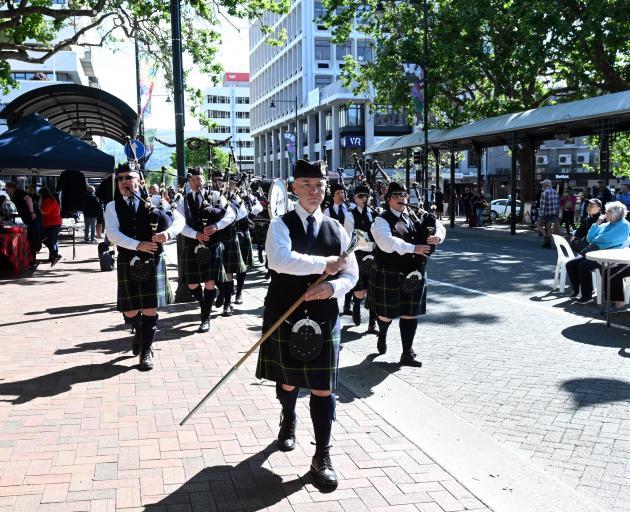 Drum major Andrew McLellan leads the City of Dunedin Pipe Band into the central carriageway of the Octagon in Dunedin at the opening of the St Andrew’s Day celebration on Saturday.
Scottish drink and food was also a feature of the day, and David Burt’s haggis balls were about as authentic a dish as you could wish for.

Originally hailing from the Isle of Skye and brought up living next door to a whisky distillery, he made sure the water of life always fetched up somewhere in the dish — in this case in a whisky mayonnaise drizzled on top, Mr Burt said.

"Whisky and mayonnaise are a tradition in Scotland, so it needed to be in there." 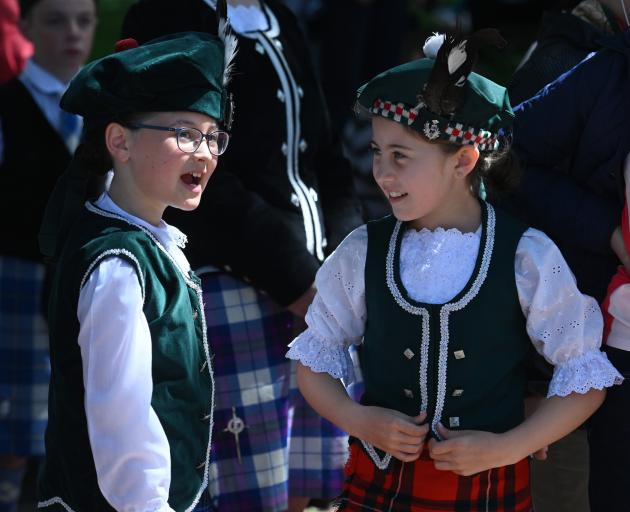 Hannah Hamilton (10, left) and Luciana Brown (11) watch and wait for their turn to dance with the Ghillie Callum Dancers.
Haggis can be an intimidating foodstuff for some, so his haggis was designed to be a crowd-pleaser and rather than following tradition and cooking it in an animal stomach, the usual stuffing was pre-baked.

"That means it doesn’t have that strong flavour you get from the stomach, but there are a lot of spices in the batter — it’s not just a straightforward batter — and then, of course, there’s the mayonnaise.

"There’s not many who don’t like it — it’s meaty, tasty and it’s not overpowering."

Other activities during the day included Scottish dancing displays, a porridge-eating contest and a strongman competition.