Stadium's big test: we have it covered 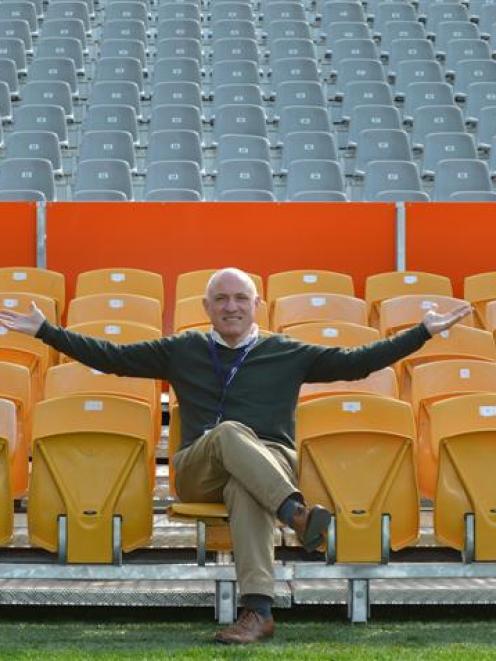 Dunedin Venues Management Ltd chief executive David Davies tests temporary seats in front of the west stand at Forsyth Barr Stadium yesterday, for the first appearance at the venue by the All Blacks on Saturday. Photo by Peter McIntosh.
When the lights at Westpac Stadium in Wellington went out in front of an international television audience, a lump began to grow in David Davies' throat.

The man tasked with running Dunedin's Forsyth Barr Stadium is in the final stages of trying to plan for every eventuality just days before the All Blacks run out under the roof for the first time.

Saturday night's test promised to be one the sternest to date for Dunedin's year-old venue, which has so far hosted four rugby internationals - all of them during last year's Rugby World Cup - but never the All Blacks.

More than 29,000 fans were expected at the ground, while another global audience would be watching the match on television - a fact not lost on Mr Davies.

"It's going to be seen around the rugby-playing world. There will be people in France getting up very early Saturday morning.

"We are very conscious that this is going to be seen across the globe, live."

The fact the venue's first All Blacks test was against the old foe - the Springboks - was also not lost on Mr Davies.

"This is, to me, probably the most competitive international of them all ... we recognise that, and we are obviously proud that the New Zealand Rugby Union have trusted us with the event."

Extra seats were already in place, digital advertising hoardings were about to follow and much of the playing surface was already a no-go zone as the finishing touches were added inside the stadium.

But one thing Mr Davies could not control - even with a roof - was the weather.

The point was highlighted by Saturday's events in Wellington, where a lightning strike in Manawatu plunged 30,000 fans at the Westpac Stadium into darkness in front of an international television audience.

In Dunedin, a southerly storm was forecast to bring snow to low levels today, and, with it, the possibility of water draining through the plastic roof and on to the playing surface below.

The roof was designed to drain that way, but could still leave "bruised" yellow patches on the pitch below, he said.

If that did not happen, there was always the fractionally small chance of a repeat of Wellington's black-out, although stadium power configurations made that unlikely, he said.

"Clearly, we have got contingencies here ... but the reality is, who knows?" he said.

It was the potential for those types of curveballs that kept the lump in Mr Davies' throat, despite staff planning for any eventuality, and the real test would be how they responded, he said.

The hope was fans would leave thinking about the match they had just watched "and not some catastrophic event of nature", he said.

Work to plan for the test had begun three months ago, increasing in pace last week, and would "reach warp speed" by Saturday, he said.

Installation of the stadium's temporary eastern stand and its 5300 seats was completed last week, after two weeks' work, and a further 500 temporary seats had been installed at the stadium's western end.

Work on the broadcast media box in the north stand was also complete, as was the conversion of the old main south stand television and radio facilities into an extra corporate lounge space for 80 people, he said.

Areas of wear on the playing surface were also being fixed, and the stadium's floodlights had been tested and adjusted to ensure they were at their best, he said.