By John Lewis
0 Comments
Security improvements should be considered a high priority at supermarkets with pharmacies, the union for Countdown staff says in the wake of the stabbings at Dunedin’s central city store.

Two Countdown Dunedin Central staff members were among those injured.

He had staff working on a community impact plan, and the meeting with Countdown would form part of that, he said. 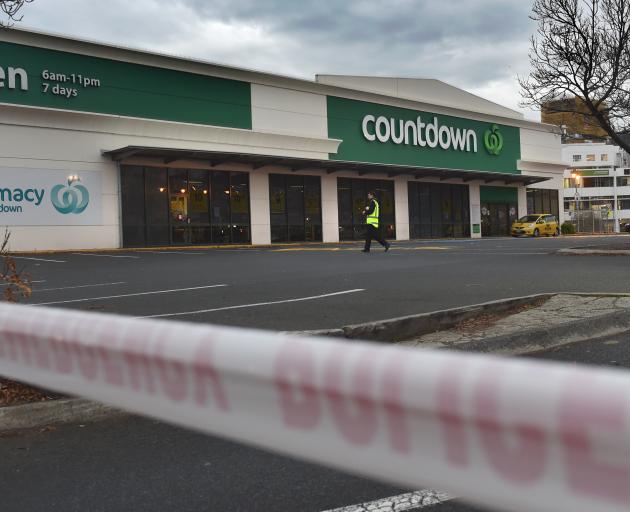 A security guard patrols the empty Countdown carpark. PHOTO: PETER MCINTOSH
Police were called to the supermarket "from time to time" to deal with incidents, but nothing of that nature.

"Unfortunately, I don’t think that security staff would have been able to stop this situation.

"There probably would have been one other victim.

"It’s hard to know until we find out more about this guy who did it," she said.

"I think it is an important point that some of the supermarkets these days have pharmacies inside them, and where there are pharmacies, there is that potential for people with addiction issues to want to get their hands on certain things.

"I think all the stores where there are pharmacies, there needs to be a second look at security improvement."

Mrs Williams said staff often talked about safe staffing levels — "having more staff on the shop floor. It is important in terms of deterring would-be aggressors".

It was an initiative the union wanted to put to Dunedin employees before implementing, she said.

Mrs Williams said staff were still traumatised by the incident and it would be very difficult for them to return to work.

"What we are hearing is that a lot of people are still in a lot of shock and feeling very wary of the store.

Countdown corporate affairs general manager Kiri Hannifin said yesterday the company was concerned about the frequency and severity of assaults in its stores.

Assaults on staff had increased by 600% during the Level 4 lockdown early last year.

"But since then, and if you take away those six weeks, we've still had a 300% increase since 2019, so that's really significant."

The company was working out how to deal with random threats, which included threats to kill, bomb or injure staff members' families, and racist slurs.

She said security had been increasing at stores month by month since last March, and while many stores had security all the time, others had it on occasion.

She was not available for an interview yesterday afternoon because the company's focus was on the injured staff, their families and the wider staff team, a spokeswoman said.