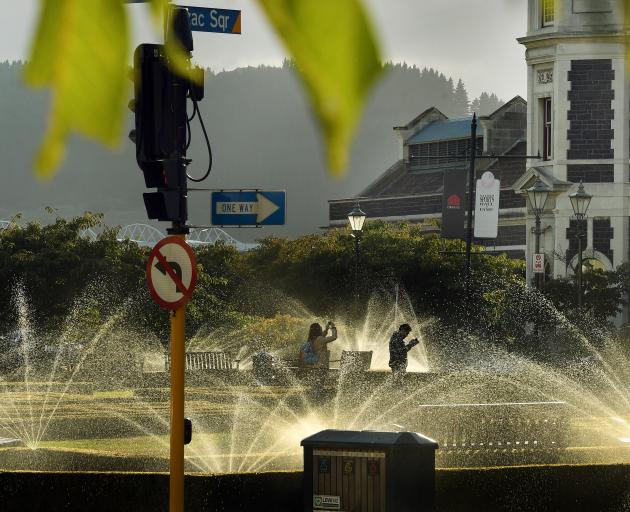 Water flows from piping used in the Star Fountain as council staff test a failed plan to return the fountain to a space outside the Dunedin Railway Station. PHOTO: STEPHEN JAQUIERY
April fools!! So be honest, how many of your guys fell for it?

A planned return of Dunedin's iconic Star Fountain outside the Dunedin Railway Station appears doomed, after health and safety concerns for a nearby cycle lane, and e-scooter riders, stymied the idea.

Trials have been under way on Anzac Square with original piping and other equipment from the fountain that once graced the lower Octagon laid in flower beds to check it still worked.

A council spokeswoman said the trial had been "extremely successful".

Lighting from the original fountain had been retained, and worked well decades after it was removed.

A report to the council released after the trial said the fountain would enhance the tourism package Dunedin offered, and result in major economic benefits to the city.

It noted the constant calls from residents over the years to bring back the popular attraction. 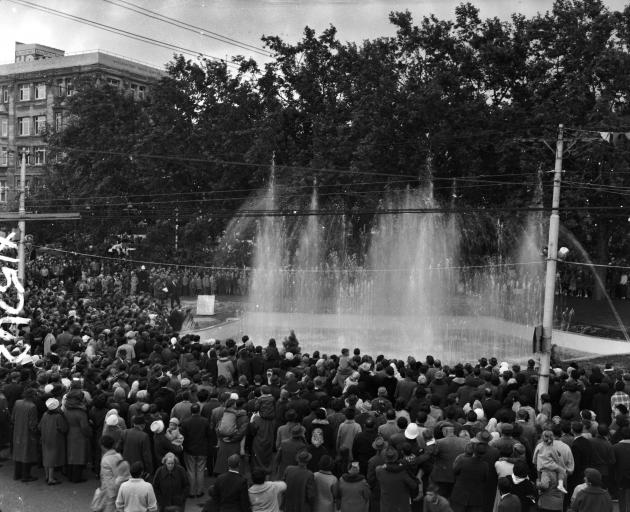 Crowds gather to watch the Star Fountain in the Octagon in the mid-1960s. PHOTO: THE EVENING STAR
But the spokeswoman confirmed the plan had been dumped due to health and safety concerns.

A report, put together by Dutch consultancy Larpi Stirf, said winds experienced in the area would push spray from the fountain too close to the $8million cycle lane in Castle St.

That could make it slippery, and expose riders to potential danger.

There may also be negative effects on e-scooter riders.

Rerouting the cycle lane, which runs past the site of the new Dunedin Hospital, was considered too expensive.

The council had decided to melt down the pipes and other equipment that made up the fountain to end decades of contentious debate on the issue.

The spokeswoman said with the equipment no longer available for the fountain's return, residents would probably move on to some other "feeble debate".

The destruction of the pipes in a large council furnace would occur at noon today, along with a private ceremony for councillors.

The metal would be repurposed for cycle stands and other cycling infrastructure, which would be installed on former car parks.

Wait, they actually said this?! “The spokeswoman said with the equipment no longer available for the fountain's return, residents would probably move on to some other "feeble debate".”https://t.co/PKU4sFWOFH— Stu (@StuFlemingNZ) March 31, 2019

So..... What are we going to do about rain on the cycleways then? Cant have the cycleways get wet can we (cover them all perhaps?)
And who is this spineless spokeswoman? 'Another feeble debate'
Umm, sorry buddy, we pay your salary, and as such, are entitled to debate whatever the hell we like.
I'd like this individual named so we can campaign to get rid of her and her obviously toxic attitude to the residents

Should've know better than the council listening to what the people wanted ;)

Admittedly, the part that was most believable and made it appear 100 percent was the 'council reaction'

Oh..... As we paid the Dutch for this?
Surely we can make our own minds up

I am OUTRAGED!!!...But I should be fine by midday. Thanks ODT.

The people of Dunedin would far rather have a fountain than useless cycle ways and the despised e-scooters. Time the DCC got things into perspective.

A not so subtle dig at the council there!

On any other day of the year this article wouldn't surprise me.

To be honest, I wouldn't be surprised if the Council did melt down the old fountain!

We see nothing funny in this and have cleverly ignored your mendacious folly to have a go at the Council and anyone else at City Hall.