By John Lewis
0 Comments
It is a long way from Mt Everest but Harjinder Singh Chander is planning to use Dunedin’s Baldwin St to reach some dizzying heights this weekend in support of mental health.

The 30-year-old Henley dairy farmer plans to run up and down Baldwin St for the length of a marathon (62 times), but if he reaches the goal and still feels good, he plans to continue the equivalent length of the route up Mt Everest (135 times). 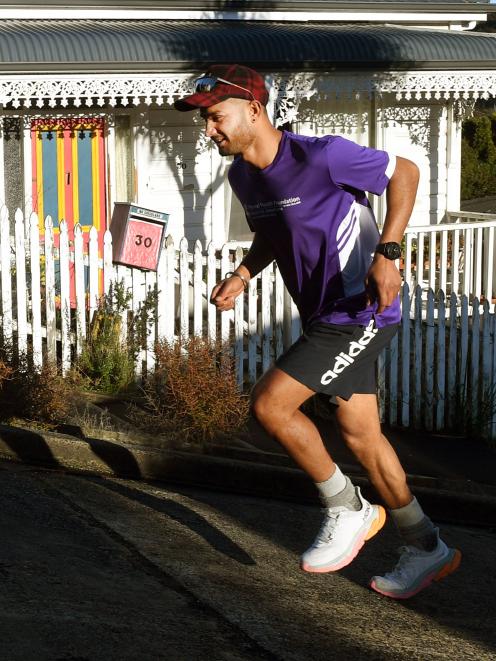 Harjinder Singh Chander hopes to run up and down Baldwin St 135 times in 30 hours, to raise awareness and funds for Mental Health New Zealand. PHOTO: STEPHEN JAQUIERY
He will start at 5.30am this Saturday and if he goes for his "Everest" challenge, he hopes to be finished about 30 hours later.

"We are not really well known for being extreme runners. As far as I know, I’m the only one from my home town [on the border of India and Nepal]."

Mr Chander said he was attempting the extreme run up the world’s steepest street to raise awareness of mental health issues, particularly among farmers, who were not very good at talking about their mental health.

"Mental illness is a serious issue in New Zealand and is often ignored.

"There are almost 500 deaths a year in New Zealand due to suicide and this number is not decreasing. In the world, someone dies as a result of suicide every 40 seconds.

"It has been found that approximately a third of Kiwis will suffer with mental distress in their lifetime.

"This is not an issue we should be ignoring, but it is something we should take action upon and try to make a difference, so it's my turn to play my role for the community."

He said he chose to show his support by running and walking, because they were great ways to alleviate depression, relieve stress, and lower blood pressure.

Training for the event had been relatively easy, because it basically consisted of all the work he did on the farm each day.

Mr Chander said the Baldwin St run would not be the first extreme run he had completed.

He had previously run the Queenstown marathon in gumboots, he ran for 15 hours up and down Mt Cargill in gumboots and overalls, and he had completed the 326km Alps2Ocean Ultra.

And in August this year, he plans to run the 50km Naseby Water Race in gumboots, again, to support farmers and Mental Health New Zealand.

"I’m lucky. I have a long weekend off, so I don’t have to get up and feed the cows."