Still searching for pets 1 year on

A year ago today, Dice and Weed went missing from their home on Otago Peninsula.

Alan Funnell and Louisa Andrew have not stopped searching and do not plan to any time soon.

Signs alerting people that 9-year-old black poodle Dice and 3-year-old terrier Weed are missing have gone up around the country, including as far afield as Kaitaia in the Far North, and close to 18,000 people follow the Facebook page set up for the dogs.

"We know they are out there somewhere. We will find them — we are just struggling to do that."

The "huge" amount of support they had received in the past year gave them a better chance of finding the dogs, he said.

"If we get any possible sighting we can put the word out there and get people to look for them anywhere in New Zealand.

"It’s huge support — we are humbled by the support we get."

"[The money] is pretty much used up but we are going to keep going," Mr Funnell said.

Along with the support came plenty of theories and rumours on what could have happened to Dice and Weed.

One rumour was that the dogs had scared sheep on a neighbouring farm and a farmer had killed them. Mr Funnell did not think that was likely.

"We have heard different rumours over the last year, but we talked to all our neighbours. We have got no problems with any of them.

"It is highly unlikely." 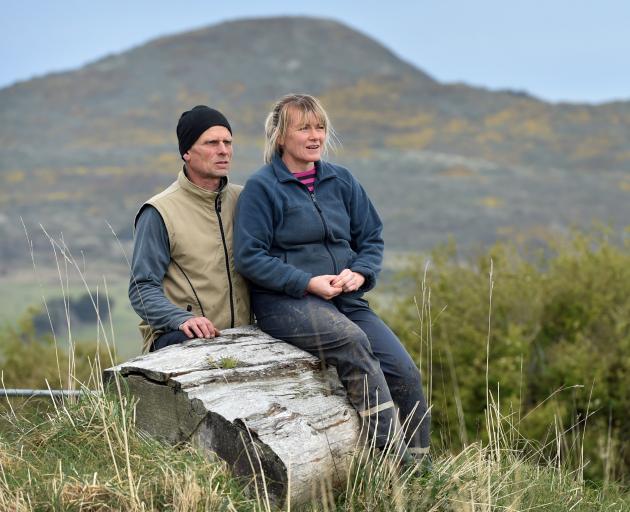 Alan Funnell and Louisa Andrew have not given up the search for their dogs Dice and Weed, who went missing from their home in Sandymount on Otago Peninsula last year. PHOTO: PETER MCINTOSH

While there was a small chance someone had not told the truth, they had talked to their neighbours and been allowed to search their properties, he said.

"We just don’t think it is an option."

As for a rumour the dogs had previously worried neighbours by going on to their properties and scaring sheep, there had never been any complaints of that and he was not aware of that ever happening, Mr Funnell said.

"We have got sheep of our own, so they were used to sheep.

"If they were chasing sheep — we would hate it — but we could understand why they would be shot."

The next step in the search was to get flyers out to every rural property in New Zealand, he said.

"We think they are not living in town — they are out somewhere remote."

Hope remained Dice and Weed were still alive, and it was important to keep people aware and looking, he said.