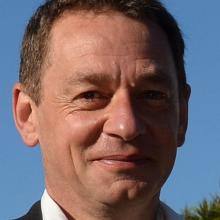 Norcombe Barker.
An Otago Peninsula group has appealed a resource consent to subdivide farmland and allow four houses to be built in an outstanding natural landscape area.

The decision followed a Dunedin City Council hearing in March for the subdivision on the isthmus between Hoopers and Papanui Inlets, and on the northern slopes of Mt Charles.

Opponents of the plan labelled the decision "terrible" and "a travesty".

The appeal document said Stop was appealing the whole decision to grant consent.

Reasons included that the decision failed the Resource Management Act’s purpose of protecting the outstanding natural landscape, was contrary to the objectives and policies of the council’s district plan, and assessed effects against "an erroneous permitted baseline"; what the landowner could do on the land by right.

Stop’s Norcombe Barker, who is  managing director of Larnach Castle, said people outside Stop were expected to be involved in the appeal.

"It’s a sort of community thing."

Mr Barker said the consent decision had been discussed among the leaders of Stop, who "for obvious reasons thought it wasn’t a good thing for the Otago Peninsula, the wildlife and the integrity of the district plan".

The organisation would raise funds for the appeal, and would not use money from its general reserves.

Asked if he was confident of a successful outcome, Mr Barker said Stop had a very good case.

Its success would be up to the court.

"There’s a lot of points where we disagree with the ruling of the commissioner."

Mr Clearwater said he was not surprised by the appeal and  intended to carry on with the process.

Mr Clearwater  was confident he would prevail.

"It’s been granted," he said of the consent.

"It’s just the same people determined to stuff someone up."

He said opponents of his plan would not accept he could legally have split the land up into six 15ha lots, which would have been a worse environmental outcome.

"We could have done six with no consent whatsoever.

"Now we’re retiring titles and amalgamating titles to keep Mt Charles in one piece, and they’re still dead against anything."

Council resource consents manager Alan Worthington said the Environment Court would now consider whether mediation would be an option. If it was, the court would arrange that.

If mediation was not successful, the court would set a timetable for a hearing.

That would not be "any time soon".