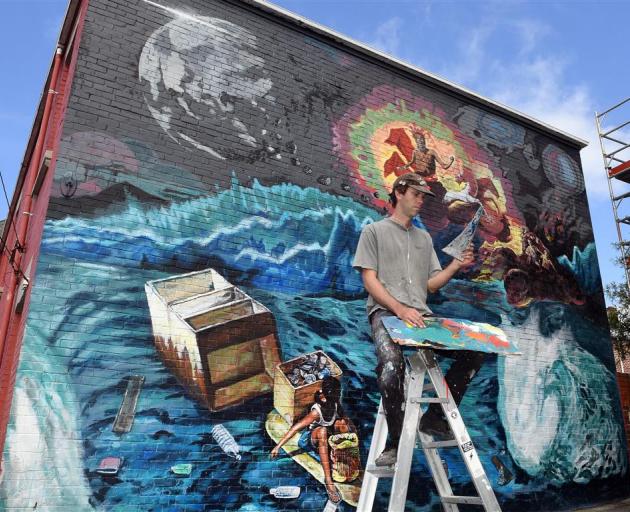 Artist Guy Howard-Smith said the mural he was painting in Castle St was designed to make people consider the consequences of littering.

The quarter was often "messy'' so it was an ideal location for the mural.

The mural depicts a girl on a surfboard paddling among a "sea of plastic'' and collecting rubbish.

Above the girl was an "apocalyptic vision'' of a planet disintegrating and Greek God of the sun Apollo - a nod to global warming.

The mural revealed how littering had a ripple effect to a greater consequence "which could be our fate if we don't take responsibility for our actions.''

He started painting the 7m high by 9m wide wall on the side block of student flats about a fortnight ago. The mural was expected to be finished by the end of the week.

Resene gave the paint and Bramwell Scaffolding gave the scaffolding.

Mr Howard-Smith hoped the mural would stop the graffiti in the area, which was becoming more prevalent.

Keep Dunedin Beautiful co-ordinator Ashlea Muston said the mural was a "vibrant addition'' to the area and a reminder to students about managing their waste and helping to keep Dunedin's streets clean.

"The wall had been transformed from a tagging hot spot to a bright, creative incentive for students to think twice about leaving litter on the streets.'' Ms Muston said.