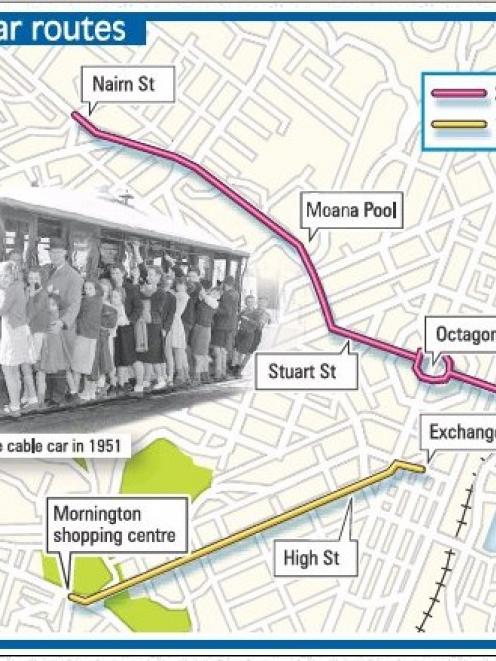 Please click the image to view the graphic.
A plan to have cable cars rolling through the centre of Dunedin for the first time in more than 50 years has been rejected in a report by Dunedin City Council staff.

The vision, by a group of three Dunedin men, was for cable cars on a 2.2km line from the Dunedin Railway Station through the Octagon, passing the Robbie Burns statue, before climbing Stuart St.

However, a second plan - for cable cars to run from the Exchange up High St - remains a possibility.

The city centre route would cost an estimated $13 million to develop, with stops in the Octagon and at Moana Pool and the Nairn St reserve, in Kaikorai Valley.

However, council transportation planner Don Hill said doubts over the feasibility of the project meant it should not proceed.

An independent study by Mein Consulting Ltd, commissioned by the council, had identified "significant flaws" in the proposal, including the backers' estimates of capital costs and patronage.

Mr Hill said it would also disrupt the operation of upper Stuart St - an arterial traffic route - and require the complete redevelopment of the Octagon.

His views are contained in a report to be considered by councillors at a meeting of the economic development committee tomorrow.

The report recommends telling the group "that the council does not wish to proceed further with their proposal".

Instead, Mr Hill recommended the group work with the Dunedin Cable Car Trust, which was developing separate plans for a 1.5km cable car route between the Exchange and the Mornington shopping centre.

The same feasibility report had also questioned the viability of the High St proposal, but the trust believed their plan would create a "world-class tourist attraction", Mr Hill said.

The trust planned to press ahead with a detailed investigation and costings before deciding whether to seek council approval for the project, Mr Hill said.

The groups would benefit from working together, although the recommendation did not imply the council would give approval to any project that eventuated, he said.

The Stuart St route was promoted by Graeme Burgess, Eckhard Marthen and Chris Reid, all of Dunedin, in May last year.

At the time, Mr Burgess told the Otago Daily Times it would cost $13 million to develop and would initially operate as a tourist venture, but could be expanded to accommodate commuters.

Mr Burgess did not want to comment yesterday, saying he had not seen the council report and the proposal had been left "in their [council's] court".

However, Cr Richard Walls, a supporter of the return of cable cars to Dunedin, said he believed there was room for one cable car development in the city, and believed it could happen in the next five years.

He believed the feasibility of a High St route could not been ruled out, and would suit the historic precinct area despite the "enormous challenge" of making it work.

Any cable car development would come more than 50 years after the last of the city's routes closed in 1957.

The first of the routes, between the city centre and Roslyn via Rattray St, was established in 1881, and at its peak the city had three main and two connecting routes.