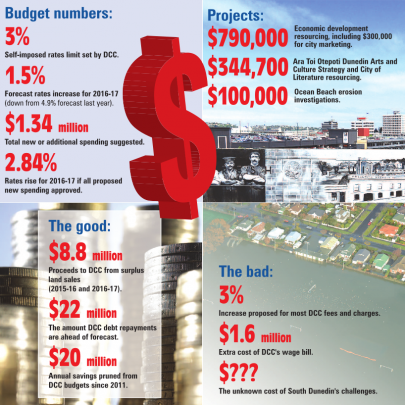 Dunedin's marketing spend - and its public profile - could be in for a $300,000 boost, but big challenges remain as city councillors prepare to chart the city's course for another year. Reporters Chris Morris and Craig Borley have been reading the 2016-17 pre-draft annual plan.

A push to consider greater use of shared services by councils across Otago will begin with water infrastructure, and a new council-controlled organisation could be up for discussion, the Dunedin City Council says.

Council chief executive Dr Sue Bidrose has prepared a report on shared-services investigations to be considered by councillors at next week's annual plan hearings.

In it, she signalled water and transportation would be two complex areas to fall under the microscope initially, as Otago councils worked together to identify the potential for extra savings.

That was despite the potential for ‘‘public concern'' over any move towards a shared services model involving water, such as using a council-controlled organisation (CCO) model, being seen as ‘‘a first step towards privatisation'', her report said.

The Government has already introduced a requirement for councils to review the cost-effectiveness of all their services as part of changes to the Local Government Act, as well as promoting more shared services.

The reviews had to be completed by August next year and Otago's councils had decided they provided the best mechanism to assess the potential for greater shared services as well, Dr Bidrose said.

The reviews would initially focus on areas including building consents, regulatory and back-office services and civil defence.

But the Government had also made it clear it wanted infrastructure to be examined, and water and transportation were the best places to start, ‘‘just because they're so big'', Dr Bidrose told the Otago Daily Times.

Potential options to be considered would include a CCO owning or running aspects of the region's water infrastructure, although any decisions would need to be made by all councils, she said.

Asked about the likely public reaction, Dr Bidrose said any change would be about providing better, and more efficient, services.

‘‘It's not about selling the services. We're very clear about that ... it's about making sure the ratepayer is getting the best services for their money.''

But the potential to dilute an individual council's control of its water infrastructure ‘‘may be seen as a risk'' and would be considered as well, she said.

‘‘Certainly it's not something any of us will ignore.''

A CCO model for water was already used in some parts of New Zealand, including Auckland, and the rejigging of Otago's rural fire arrangements into the Otago Regional Fire Authority was another example that worked well, she said.

Work on the reviews was expected to begin ‘‘within weeks'', but it was too soon to say what the cost, or potential savings, could be, she said.

‘‘There are some areas in Otago where we think there are real savings to be made by doing things differently.''

Costs would largely be in staff time for all councils, and the DCC would strive to meet its share of the workload from existing resources, but extra funding could be required for the 2016-17 year, Dr Bidrose said.

Further reports, including on financial implications, would be provided in May, before the annual plan was signed off, she said.