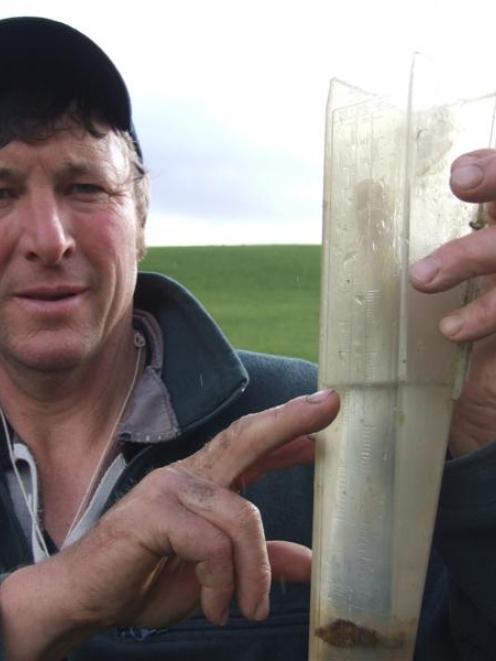 Farmer and DCC infrastructure services committee chairman Andrew Noone.
New Zealand's biggest dam could be built in the Lammerlaw Range, northwest of Dunedin.

And he has the support of two city councillors.

Ensuring security of water supply, meeting demand and making the most of commercial opportunities are key reasons the city should build a dam on the scale of Australia's massive reservoirs in the coming decades, Mr Mackie says.

The city's rural councillors Andrew Noone and Kate Wilson have given the concept provisional approval.

Cr Wilson, who owns a farm at Middlemarch and is a council appointee on Strath Taieri Community Board, said a large dam could be a "clever idea" if it was properly integrated with the needs of rural and urban water users.

Cr Noone, who owns a farm at Waikouaiti and is chairman of the city's infrastructure services committee, said a city and private sector partnership could be the best way to maximise the dam's potential.

Mr Mackie envisages an enormous dam built on the Lammerlaw Range 65km northwest of Dunedin supplying water to the city as well as powering hydroelectric generators and enabling an extensive irrigation scheme.

Asked what size a "super dam" would be compared with existing New Zealand dams, Mr Mackie said the dams of Queensland and New South Wales would provide a better reference point.

It has a storage capacity of 12,500 megalitres [12.5 million cubic metres] - about 1.5 times as much water as Wellington Harbour.

Adequate water storage in light of climate-change predictions was the catalyst for the concept, Mr Mackie said.

The city has 20 days' water storage capacity, but that would not be enough as rainfall reduced and demand grew.

The Lammerlaw Range was the source of two of the city's main water supplies, Deep Creek and Deep Stream, and was the ideal location for a large dam, Mr Mackie said.

"It's snow tussock land. It's like a big sponge."

The super dam was still at a concept stage.

Cr Noone said rainfall on his farm had reduced by a quarter since the mid-1980s.

"Increasing water storage is a sensible way to protect future generations," he said.

Cr Wilson said a dam project was "probably five years too late" given the rate of climate change.

The Upper Taieri Water Catchment Group had been working on an integrated water strategy for two years, but the city had not taken opportunities to be involved, she said.