Syrians prepare for own new arrivals 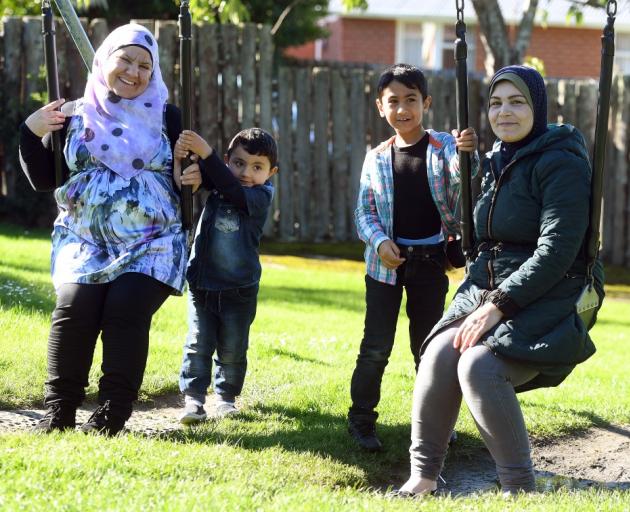 Enjoying themselves in a park in Brockville are (from left) Ahlam Safar, her son Ibrahem Abs (3), Mohammad Alhlak (7) and his mother Shahla Al Arab. PHOTO: STEPHEN JAQUIERY
Dunedin's Syrian refugees are about to welcome some new arrivals of their own as the city marks a year since they first resettled here.

Since April 22 last year, 205 mostly Syrian refugees have resettled in Dunedin and now about 10 of them are pregnant.

At every opportunity, refugees spoken to by the Otago Daily Times over the past few days and throughout the year have been full of gratitude for the welcome Dunedin and the Red Cross have given them.

In that year, their English has steadily improved - the Arabic shukraan has become ``thank you'' and reliance on interpreters has decreased - refugees have made new friends and Dunedin has increasingly felt like home.

But memories of Syria and the horror of war stick, and refugees talk of bringing their less-fortunate loved ones to New Zealand and the peace Dunedin offers.

Ahlam Safar, who is eight months' pregnant and originally from war-torn Homs in Syria, is excited about having a New Zealand-born baby and says Dunedin is feeling more like home.

Tears well up as she recalls the death of her 4-month-old daughter Hanaa in Lebanon, the result of substandard health care.

But she has been reassured by the standard of care she had been given in New Zealand by her doctor and midwife.

Healthcare professionals had also been of great help to her husband Youssef Abs, who has epilepsy.

Adjusting to life on the opposite side of the world had been hard, and although she had learnt English in Syria, understanding New Zealanders was difficult because they spoke ``very quickly''.

But with the help of English teachers at Otago Polytechnic and fellow Arabic speakers already living in Dunedin, she had managed to adjust.

``I want to say thank you to the teachers at the polytechnic.''

Her husband missed the cheap cigarettes of back home and longed to see his mother, who has escaped from Syria to Egypt.

Mrs Safar said she missed her home town, but had no plans to go back.

Shahla Al Arab, who is from Idlib near the site of the recent chemical weapons attack and is six months' pregnant, said she was happy in Dunedin.

Hearing horrible news from back home was ``very hard'', but it was reassuring her family had escaped to Lebanon even though conditions there were also tough.

Mrs Al Arab wanted her sister, who was also pregnant, to be allowed into New Zealand so she could support her through her pregnancy.

Life in Dunedin continues to get better for Wafaa Al Ashram and her son Ahmad Alhamwi (14), who started at King's High School this year.

``My life has witnessed a huge transformation from zero to 100%,'' Mrs Al Ashram said.

``It's not only the land itself, it's the people, the community, how supportive they are.''

She helped fellow refugees by doing sewing for them and was busy working on a special item of clothing she would give to a pregnant friend once she had given birth.

It made her feel ``fantastic'' being able to help people.

``When they say `bless those hands', it just means the entire world.''

Her only hope was that her oldest son, who is still in Damascus, would eventually make it to Dunedin.

``He's very keen to join us here because the conditions are going from bad to worse in Syria.'' 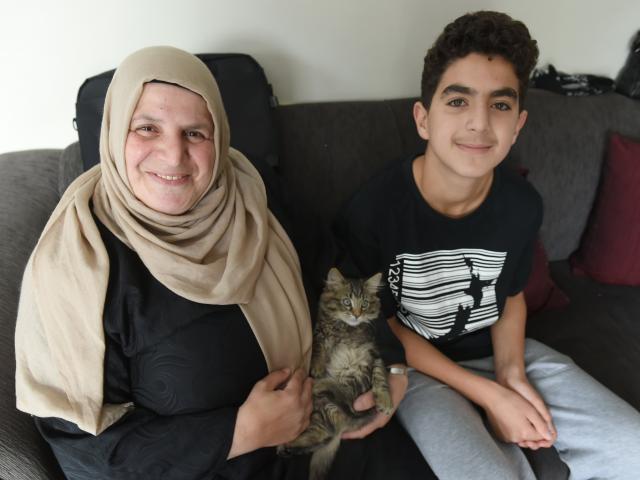 Wafaa Al Ashram and her son Ahmad Alhamwi (14) relax with their kitten Memo. PHOTO: GREGOR RICHARDSON
Ahmad said King's had been ``really good'' and he was playing football for Melchester Rovers.

Red Cross volunteer Lynette Will, who was assigned to the pair, said they were like family now, a feeling which was mutual.

``We eat together a lot, we go shopping. In the summer, we went to the Botanic Garden and round to the beach,'' Ms Will said.

It was definitely a two-way thing and in the past week, when she had been stuck at home with a cold, someone had been around every day with food.

``We have been overwhelmed and humbled by the generosity of locals during the last year.

``It's allowed people to do something positive at home to address some of the things they see happening around the world,'' Ms Price said.

Steering group chairman city councillor Aaron Hawkins said some former refugees had already found employment, but the focus for many had been learning English.

Being a resettlement city had also created some challenges, particularly around language and ensuring services meet the needs of former refugees.

``People who have a refugee journey have been through hardships New Zealanders often cannot imagine.

``They have lost their homes, their family members, and to some extent their country.

``We want Dunedin to be a place of welcome and safety.''