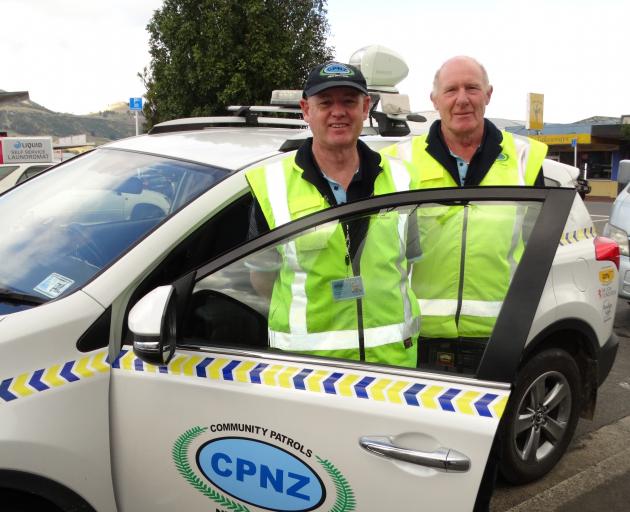 Mosgiel Community Patrol co-ordinator Merv Rowe (left) and volunteer Dave Mitchell. Photo: Brenda Harwood
Watching over their community, while being ‘‘eyes and ears’’ for the police is a labour of love for members of the Mosgiel/Taieri Community Patrol.

The 30-strong group has been actively patrolling the Mosgiel-Taieri area, including Green Island, Fairfield, Brighton, and Outram, on Friday nights and Saturday afternoons and nights for the past 10 years.

‘‘We are the eyes and ears of the police — wherever they direct us to, we go, any time of the day or night,’’ Mosgiel/Taieri Community Patrol vice-chairman and co-ordinator Merv Rowe said.

‘‘We also support the emergency services in response to situations like flooding, fires, or when they need help with traffic control,’’ he said.

In recent times, callouts had included doing traffic control near fires in Burnside, Westwood, and Saddle Hill, and sandbagging during flooding.

This important role fulfilled by the group, which was one of three community patrols in the greater Dunedin area, was appreciated and supported by the local community, he said.

However, there is one area Mr Rowe and fellow community patrol volunteer Dave Mitchell feel is lacking — the right equipment to respond to a range of medical emergencies if needed.

With this in mind, the Mosgiel/ Taieri Community Patrol is raising funds to buy its own defibrillator.

‘‘We might not need a defibrillator very often, but it would be good to have one that we can use immediately, if we need to,’’ Mr Mitchell said.

While there were defibrillators available at local facilities, such as golf clubs, it took extra time to access them after-hours.

Having a defibrillator in the community patrol car would enable members to respond immediately, in the event that someone was suffering a cardiac event, he said.

Mosgiel-Taieri Community Patrol members have embarked on a fundraising campaign for a new defibrillator, and are asking local businesses for donations, and plan to sell raffles this Saturday and Sunday at Mosgiel New World.