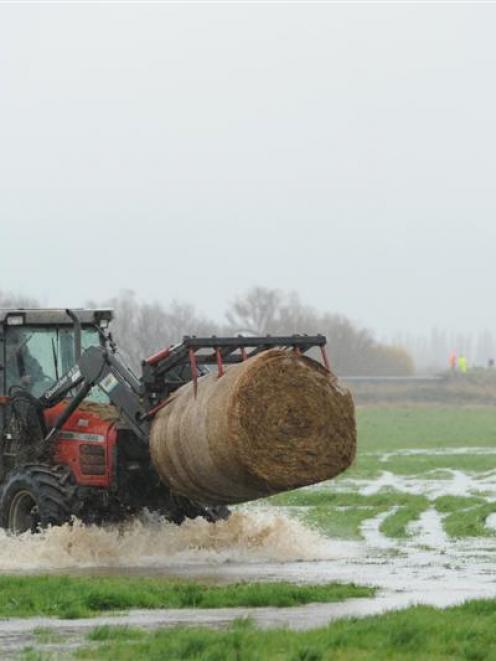 A farmer moves a bale of hay on the Taieri yesterday. Photos by Stephen Jaquiery/Otago Regional Council.
Police have been called in by the Otago Regional Council to investigate the unauthorised propping up of floodgates along the upper Taieri ponding area as the river rose on Tuesday night.

However, farmers were critical of the need to drop the gates in the first place and the lack of consultation when they were put down.

Council environmental engineering and natural hazards director Gavin Palmer said the Otago Regional Council had called police and was itself investigating how the gates were raised on Tuesday night after the council dropped them earlier that day to allow flood water into the ponding area. 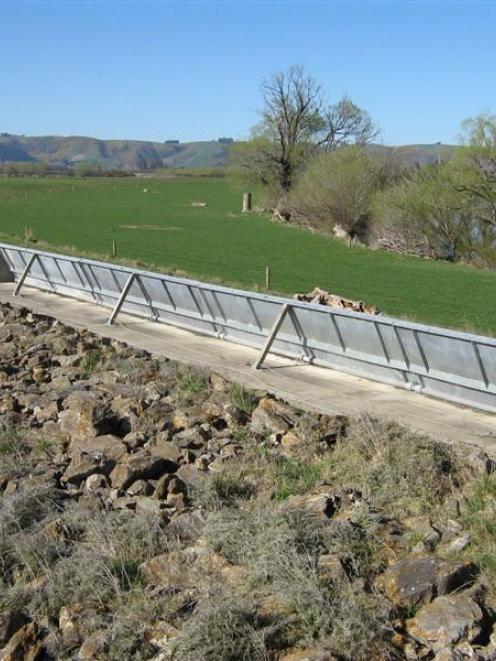 Taieri upper ponding area floodgates that were propped up by unauthorised people on Tuesday night.
Dr Palmer said the gates might have been raised to keep the land behind them drier for longer.

"We are taking the matter very seriously."

The large metal plates, controlled by cables, were designed to be dropped when water levels rose to certain height.

The gates, collectively 75m long, are dropped in three sets of four panels, which are about 1.2m high when propped.

It was a process that needed some care, as the plates were heavy and machinery such as a tractor, was needed to pull the cables, Dr Palmer said.

"Last night, somebody propped the plates back up again, leaving one section in an unsafe manner, not properly propped up."

If the river had continued to rise on one side of the gates it could have created difficulties to drop them again safely, he said.

Riverside Rd farmer Colin Scurr, a former regional councillor, has the spill gates on his property and is not happy the regional council dropped them when they did and without consultation.

"It was completely against flood policy. It's a major concern for farmers out here," he said.

"It means more water has come in and a bigger area has flooded. It'll take three or four days longer to get out."

The decision could have financial implications, as much of the land in the ponding area was used for winter grazing for cows, he said.

"It's a stressful time."

Henley farmer Shane Hildred, who has a run-off block in Riverside Rd, said it was an "act of God" that someone put the gates back up.

If they had been left open he might not have been able to get his stock out in time.

He believed it was "pretty negligent" of the council to drop the gates without talking to farmers.

If he had known, he would have changed his "thinking" dramatically, he said.

"What would have happened if the catchment area had filled up? It would have nowhere to go."

Dr Palmer said the gates were dropped on Tuesday morning, based on staff predictions of the Taieri River's flows, combined with practical and safety issues.

"It was a judgement call made.

"No two floods are the same and we have to make judgement calls with the information available."

Landowners affected by the water entering the upper pond area were notified in accordance with warning procedures, he said.