They did say they were moving house ... 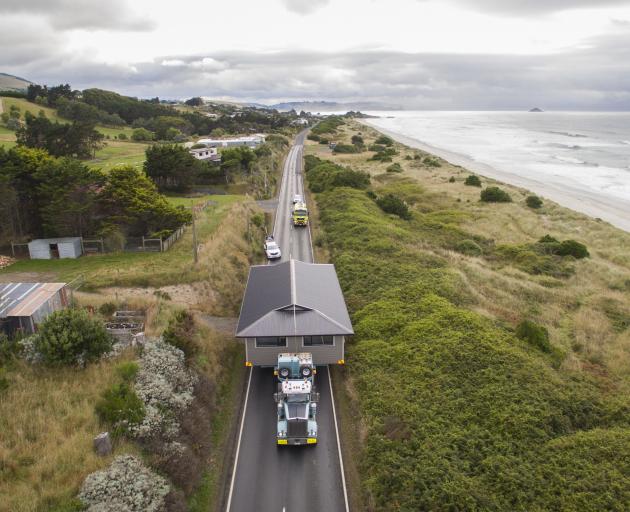 A house built at the Otago Polytechnic Architecture, Building and Engineering School in Dunedin, nears its final destination at Big Stone Rd, near Brighton. PHOTO: HAYDEN PARSONS
Seldom does anyone see a four-bedroom house moving past their front gate in the morning.

It was a spectacle that could have made some Brighton residents do a double-take yesterday.

The house was built by Otago Polytechnic Architecture, Building and Engineering School students last year, and Sasha and Shane Turner bought it at auction in November for $209,000 - ``a steal''.

The couple, who lived in Dunedin, bought a section in Big Stone Rd, south of the city, about 15 months ago and were looking for a house to put on it.

Polytechnic learning leader Graham Burgess said Fulton Hogan loaded the house on to a truck and trailer unit at the polytechnic last Friday, and started the move about 3am yesterday.

They reached the Brighton Surf Club just as many people were waking, and their final destination about 9am.

Mr Burgess said the four-bedroom home, with en suite and walk-in wardrobe, was one of several built last year by polytechnic building students, under the tutelage of lecturers.

It took 10 months to build and about 25 sponsors helped with material costs.

When it sold at auction in November last year, he said it was the first of the charity houses to sell for more than $200,000.

Since the charity auctions began a decade ago, more than $900,000 has been raised.

All money was given to United Way, which distributes the funds to Otago charities.